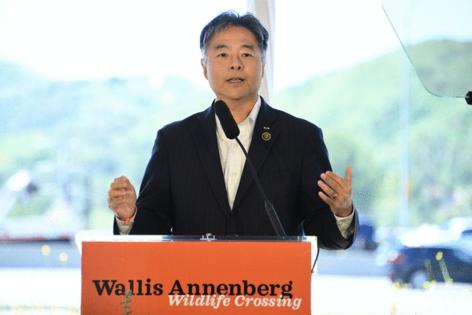 Vice chair is the No. 5 ranking position in Democratic leadership when the party is in the minority, which Democrats will be come January. Until earlier Wednesday when Rhode Island Rep. David Cicilline announced a last-minute bid for the No. 4 spot of assistant Democratic leader against South Carolina Rep. James E. Clyburn, it was Democrats’ highest ranking contested leadership race.

It took three ballots to decide since no one won an outright majority on the first two. The lowest vote-getter was eliminated after each round.

Lieu’s victory is a big win for the large delegation of California Democrats since they’ll have leaders in two of the top five leadership roles with him as No. 5 and Aguilar as No. 3. That may somewhat make up for Californian Nancy Pelosi deciding to give up the No. 1 post after 20 years.

Dingell’s pitch was centered in large part around needing to keep a Midwest voice in leadership since most of the others are from the coastal regions. She and Lieu have been serving in leadership together as two of the Democratic Policy and Communications Committee co-chairs in charge of the party’s messaging.

Leaving the election, Dingell said she didn’t want to talk but she offered one thought: “We’ve got to pull ourselves together. I hope our caucus understands majorities and minorities are made in the Midwest — and that half this caucus is women.”

Lieu’s victory means four of the top five Democratic leaders next Congress will be men. Massachusetts Rep. Katherine M. Clark, who was elected minority whip Wednesday, will be the only woman in a top role.

Beatty’s loss is another blow to women, specifically Black women. Several Black women have run for various Democratic leadership roles in recent years and all have been unsuccessful in their attempts to become the first to join elected leadership since Shirley Chisholm in 1977.

But Lieu has his own diversity credentials to tout. He is now the highest-ranking Asian American ever in House Democratic leadership.

“It’s not lost on me the importance of this vote for the Asian American community,” he told reporters afterward. “I’m very honored that the House Democratic Caucus elected a leadership team that reflects the beautiful diversity of America.”

Among the various “Dear Colleague” letters members running for leadership positions sent, Lieu’s was the most specific in addressing what he plans to do with his role. For example, Lieu said he wants to provide caucus translation services and start a professional development training series on topics such as cross-examining witnesses in hearings, preparing for television interviews and driving engagement on social media.