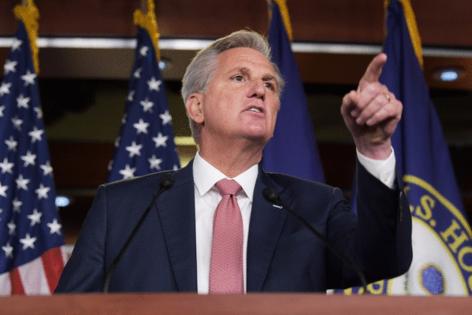 WASHINGTON — Earmarks are here to stay — at least for one more Congress.

The conference voted 158-52 against an amendment proposed by Rep. Tom McClintock, R-Calif., that would get rid of the current conference rule allowing members to earmark spending bills if they meet certain transparency criteria. One member voted present, according to a GOP aide who gave a readout of the closed-door vote.

Longtime Republican appropriators stressed support for the practice ahead of the vote.

Rep. Steve Womack, R-Ark., said earlier this month that the current process has sufficient transparency rules in place, and allows Congress to exercise its constitutional authority to oversee government spending.

House Freedom Caucus Chairman Scott Perry, R-Pa., said in a brief interview Wednesday ahead of the conference vote that scrapping earmarks would be a “pretty important marker” as conservatives weigh whether to lend McCarthy their support for speaker in a floor election Jan. 3.

“Look, we understand the nuances of it, that Congress should have a great degree of control of the spending and not just cede that authority to the executive branch,” Perry said in a brief interview Wednesday. “At the same time, to not acknowledge the coercive and corrosive power of earmarks and the dealmaking that’s associated with them is to deny reality.”

Perry and and some of his Freedom Caucus colleagues met with McCarthy on Tuesday behind closed doors to go over rules changes they are seeking, but so far McCarthy has only agreed to “minutia,” Perry said.

The earmark ban’s defeat comes after the conference before Thanksgiving voted down other amendments Freedom Caucus members proposed, like allowing committees to pick their chairs instead of the Republican Steering Committee and requiring the Republican leader to prioritize passing the 12 appropriations bills as stand-alone measures.

McCarthy had said he’ll let the conference decide whether to reinstate the earmark ban, without trying to influence the outcome. But he needs 218 votes to become speaker, and fell 30 short of that threshold during the conference vote earlier this month.

The GOP Conference adopted the rule at the beginning of the 117th Congress after it became clear Democrats were bringing back earmarks — now dubbed “congressionally directed spending.” The margin was close at the time, but earmarks have grown in popularity over the past two years, and now more than half of the conference has sought local projects for their constituents.

House Appropriations Chair Rosa DeLauro, D-Conn., brought back the practice with increased transparency rules and a cap at 1% of annual discretionary spending.

Nonetheless there’s still a large and vocal element within the conference opposed to earmarks, and a pre-Thanksgiving vote on McClintock’s amendment was postponed so members could have more time to deliberate.

“The new Republican majority needs to make a dramatic, concrete and credible statement that business as usual as Washington is over,” McClintock wrote in a Washington Times op-ed published last week. “Is there a more powerful statement it can make than to swear off the wasteful and corrupting practice of congressional earmarking?”

Since the rule change discussion began earlier this month, there’s been a concerted push by conservative activists to pressure Republicans to back the amendment.

“Earmarks are one of the most corrupt, inequitable, and wasteful practices in the history of Congress,” several organizations including the Club for Growth, Americans for Tax Reform, FreedomWorks, National Taxpayers Union, Heritage Action, Citizens Against Government Waste and more wrote in a Tuesday letter to House GOP lawmakers. “Supporting Rep. McClintock’s amendment is your first opportunity to demonstrate to taxpayers that the election of a Republican majority in the House will be accompanied by a serious effort to restore and maintain fiscal responsibility.”