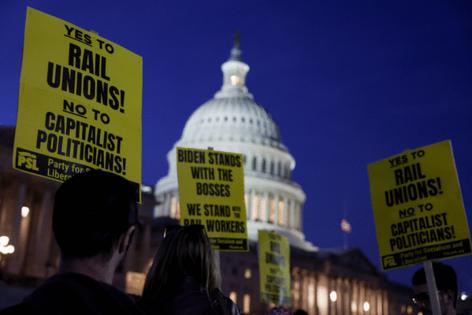 WASHINGTON — The House on Wednesday approved resolutions that would enact a labor agreement reached by the White House, freight rail carriers and rail unions and provide an additional seven days of paid sick leave to rail workers.

Both resolutions have been deemed necessary by Democrats, some Republicans and President Joe Biden. Progressives in the Senate have said they would delay a version of the resolution that includes one “paid personal day.”

The resolutions included one to enact the labor agreement reached by the White House, railroad management and labor representatives, which passed 290-137, and another, which added the sick leave demanded by four of the 12 rail unions and was adopted 221-207.

The second resolution is part of a complicated strategy to win support from progressive Democrats who insisted on a vote to add the sick leave. But it may not get enough Republican support in the Senate to reach the president’s desk.

The votes are Congress’ most recent attempts to avert a rail strike scheduled to start next week. Affected rail companies estimated the strike could cost the economy about $2 billion per day, disrupting industries that rely on rail transportation amid the holiday season.

The resolution to enact the agreement, which was rejected by four of the 12 rail labor unions, would provide for three periods off for medical care visits annually. However, it also required the visits take place on a Tuesday, Wednesday or Thursday and to be scheduled at least 30 days in advance.

The agreement includes one of the largest wage packages in nearly five decades, according to its advocates, as well as health benefits. According to the Association of American Railroads, the agreement offers $16,000 a year in additional wages and other compensation for the average rail employee.

But paid sick leave has become a sticking point for rail workers, many of whom worked in-person throughout the COVID-19 pandemic.

“The railroad is a dangerous place to go to work. If you go to work sick, and your attention lapses, you make a mistake, a bad call of judgment, because you feel terrible that day from a cold or fever or flu, you could get run over by a train,” said Clark Ballew, spokesperson for the Brotherhood of Maintenance of Way Employees Division of the International Brotherhood of Teamsters. “These are not jobs at a desk, where you answer emails with a sore throat. These are jobs where the track next to you could have an Amtrak train blow by you at 79 mph.”