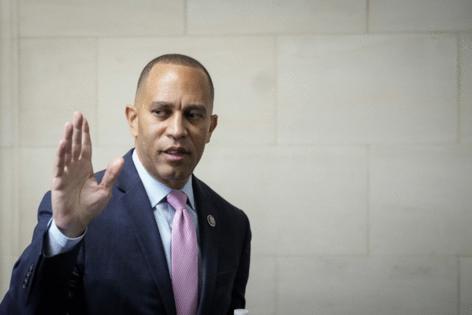 Jeffries’ new role won’t start until January when the new Congress is sworn in and Republicans take control of the House. His No. 1 priority for the next two years is to lead Democrats back to the majority in 2024.

Until then, Speaker Nancy Pelosi of California, who announced earlier this month she would step down from leadership after 20 years as the top House Democrat, will continue to lead her caucus through major lame-duck legislative negotiations on government spending, defense policy and other legislation that lawmakers hope to pass before the current Congress ends.

Jeffries is the outgoing Democratic Caucus chair, a post he’s held for the maximum two-term limit under caucus rules. Before that he served as co-chair of the Democratic Policy and Communications Committee, the caucus messaging arm.

California Rep. Pete Aguilar, outgoing caucus vice chair, was elected by unanimous consent to succeed Jeffries as caucus chair, which will be moving up in leadership rankings to become the No. 3 position.

Democrats’ leadership titles will shift when they’re in the minority because they lose the speaker position.

Democrats’ current No. 3 leader, House Majority Whip James E. Clyburn of South Carolina, is running for assistant Democratic leader, which will be the No. 4 post. He faces a challenge from Rhode Island Rep. David Cicilline, who announced a last-minute bid Wednesday.

That election will take place Thursday. Clyburn was in North Charleston on Wednesday to speak at the funeral of University of Virginia football player Lavel “Tyler” Davis Jr., who along with two of his teammates was shot by a fellow student after a class trip.

Jeffries told reporters Tuesday night he hasn’t really had an opportunity to reflect on what making history as the first Black leader of a congressional party means.

“It would take away from having to make real-time decisions as we prepare to organize for the new Congress,” he said.