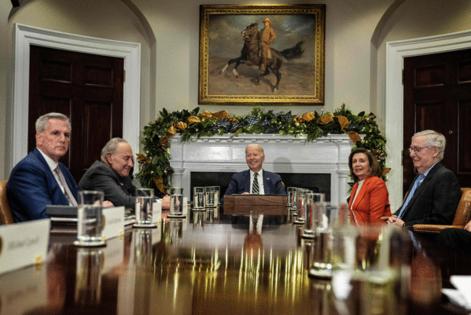 WASHINGTON — President Joe Biden, addressing a postelection gathering of congressional leaders at the White House on Tuesday, said he hoped he could work with Congress on funding the government, responding to the COVID-19 pandemic and supporting Ukraine.

House Minority Leader Kevin McCarthy looked on stoically as Biden spoke. After the meeting, he walked out of the White House and told the waiting cameras that while he "can work with anybody," he had told the president "it's going to be different" once Republicans take control of the House of Representatives next year.

Biden and McCarthy will have to cooperate come January, when McCarthy is expected to secure the speaker's gavel. Their relationship will determine not only the course of the remainder of Biden's term but also more practical questions such as whether the United States will default on its national debt.

But the two men have done anything but find compromise over the last two years. The pair have spoken only rarely since Biden took office. They spent the run-up to the midterm elections excoriating each other: Biden cast McCarthy and his party as extremists who threatened the survival of democracy, while the California Republican said Biden had "launched an assault on the soul of America."

Both the West Wing and House Republicans say it's on the other party to make amends. White House aides and allies dismiss the need to soften relations with the speaker-in-waiting, arguing that the midterm elections — in which Democrats outperformed historical trends — validated the president's policies.

"I don't have to change any of the policies that have already passed," Biden told reporters at a postelection news conference this month when asked about whether he would recalibrate his approach to working across the aisle. "I'm hopeful that Kevin and I can work out a modus vivendi as to how we'll proceed with one another."

Republicans, meanwhile, lament the White House has made little effort to work with House GOP members, many of whom rejected the bipartisan deals the president cut with the Senate on infrastructure, domestic semiconductor funding and gun safety reform.

McCarthy has his own political problems to contend with as he looks to secure the speaker's gavel. With a narrower-than-expected majority, McCarthy can afford to lose only a few GOP votes. His failed 2015 bid to replace then-House Speaker John A. Boehner, R-Ohio, was derailed by hard-line conservatives — the same wing of the party that threatens to block him from securing enough votes to win the speakership on the first day of Congress on Jan. 3.

"We have to speak as one voice. We will only be successful if we work together, or we'll lose individually," McCarthy told Newsmax on Monday. "You have to listen to everybody in the conference, because five people on any side can stop anything when you're in the majority."