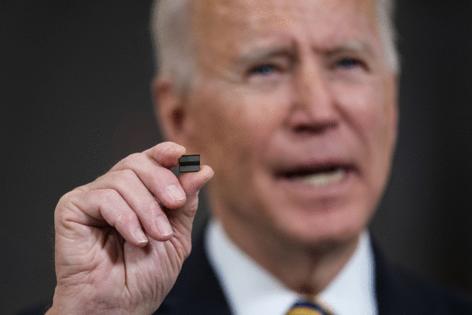 Biden toured SK Siltron CSS, a U.S. subsidiary of the Korean SK Group conglomerate, which announced last year that it would invest more than $300 million in a new site in Bay County's Monitor Township to manufacture materials for semiconductors used in electric vehicles, creating an estimated 150 jobs. The project is also supported by nearly $6 million in state incentives.

The visit comes around four months after Biden approved the CHIPS and Science Act, which funds more than $52 billion in subsidies and $24 billion in tax credits for companies to make chips in the U.S., including $2 billion set aside for legacy chips used in vehicles.

Biden championed that legislation as reversing the country's past mistakes when U.S. plants closed and opened in other countries.

"We invented the chip in America, then we got lazy," Biden said. "Federal investment helped reduce the cost of creating the market and hired its entire industry that America led, as a result. ... Then something happened. American manufacturing, the backbone of our economy, got hollowed out. Companies began to move jobs overseas, instead of products overseas, because it was cheaper for them."

The CHIPS and Science Act "is bringing the supply chains home," Whitmer said in her opening remarks, "cutting delays, cutting shortages, cutting costs and unleashing the power of American manufacturing to help us land more projects like this one. We all want the future of chips and cars and clean energy to be stamped with the words that make us proud: made in the USA and better yet, made in Michigan."

A global shortage of the microchips kicked off by the coronavirus pandemic stymied auto production beginning in 2020, forcing work stoppages and leaving nearly finished cars piling up in parking lots. Makers of other products that relied on chips, such as computers and smartphones, similarly struggled, and the shortage became one factor fueling inflation.

Chip challenges brought together politicians in Washington who were concerned about U.S. reliance on Chinese-dominated supply chains, leading Congress to pass the bipartisan funding package along with $100 billion for U.S.-based scientific research and innovation.