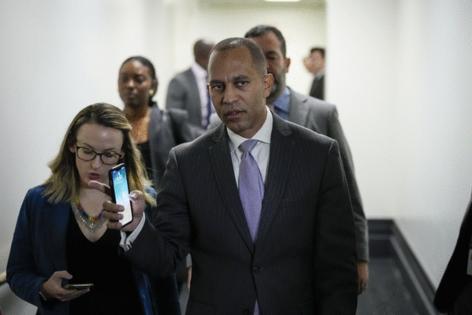 WASHINGTON — With promises to do “hard, unglamorous” work, help colleagues connect with constituents and navigate an ever changing media landscape, House Democrats are competing for open posts in the party’s leadership.

The contested posts that will be settled Wednesday include Democratic Caucus vice chair, where four candidates are vying for the fifth-ranking leadership spot. There are also seven people running for three spots co-chairing the Democratic Policy and Communications Committee, the caucus’s messaging arm.

In addition to the leadership elections, the Democratic Caucus organizing meeting Wednesday will include votes on member proposals to change various caucus rules, including a long divisive proposal to implement term limits for the party’s committee leaders. That organizing meeting is expected to spill into Thursday.

Several of the rules proposals would impact the leadership elections and are expected to be voted on before the contested races. For example, Virginia Rep. Donald S. Beyer Jr. is proposing to implement ranked choice voting for the leadership elections. Under current rules, contested races where none of the candidates earn more than 50 percent move to subsequent ballot(s), knocking off the lowest vote-getter until a majority winner prevails.

The caucus will have new leaders in the top spots after Speaker Nancy Pelosi of California and House Majority Leader Steny H. Hoyer announced they would not seek leadership positions in the next Congress. Both will remain in the House.

New York Rep. Hakeem Jeffries, the current caucus chair, and Massachusetts Rep. Katherine M. Clark, the current assistant speaker, are running unchallenged to replace Pelosi and Hoyer as the top two Democrats. Democrats will lose the speaker post when House control flips in January, so Jeffries is running for minority leader and Clark for minority whip.

Unlike Pelosi and Hoyer, House Majority Whip James E. Clyburn of South Carolina is not ready to step down from leadership altogether, even though he’s giving up his No. 3 ranking position to make way for a “new generation” of leaders.

Clyburn is running unopposed for assistant Democratic leader, a position the caucus first created for him in 2010 to end a messy race with Hoyer for the No. 2 post.