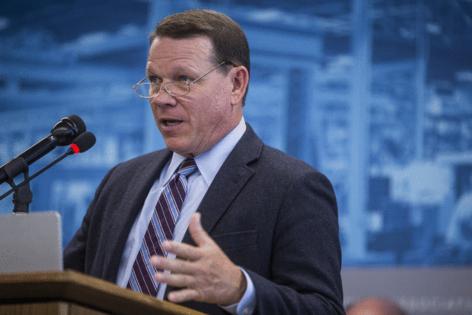 The presumptive chairman of the House Transportation and Infrastructure Committee aims to keep a skeptical eye on the Biden administration’s implementation of the bipartisan infrastructure law after the 118th Congress convenes in January.

Missouri Rep. Sam Graves, the panel’s ranking member in the current Congress, called the 2021 infrastructure measure “a vehicle for the administration’s woke agenda” and was among 200 House Republicans to vote against the legislation.

Graves said he would also prioritize updates for the federal permitting process and aviation workforce rules in the Federal Aviation Administration reauthorization bill. The current authorization expires at the end of fiscal 2023.

Graves has served in Congress since 2001 and has sat on the committee since arriving on Capitol Hill, making him the most senior Republican on the panel. The House Republican Conference unanimously elected him to be ranking member in 2018. No other GOP committee members have publicly expressed interest in the chairmanship.

Republican opposition to the White House’s implementation of the bill blossomed out of a December 2021 Federal Highway Administration memo that encouraged states to follow a philosophy that Congress trashed in the final iteration of the bill: To focus federal funds on maintaining existing roads before expanding capacity.

The language in the memo went “far beyond the language of the law” and discourages states from choosing projects based on their own priorities, Graves wrote in a September letter to DOT. He also accused the agency of trying to “get a second bite at the apple” after the passage of the Infrastructure Investment and Jobs Act.

The memo is “a good example of this administration twisting the intent of IIJA to focus on their own climate-focused priorities instead of conforming with the letter of the law,” a Graves spokesperson said. “The utility and feasibility of (electric vehicles) and EV infrastructure in a district like (Graves’) — districts with large areas and many smaller communities, and the need to power large trucks and farm equipment with traditional fuels — are very different compared to some other parts of the country. They shouldn’t be enforcing a one-size-fits-all agenda.”

The spokesperson added that Graves will also likely focus on oversight of the One Federal Decision codified in the package, which requires the Transportation Department to streamline the project permitting process.

“Permitting reform” has become a common buzz phrase on Capitol Hill since West Virginia Sen. Joe Manchin III attempted to attach legislation to the climate and social spending package that would have created timelines for how long environmental reviews of large-scale infrastructure projects can take. In the face of Democratic resistance, Manchin’s legislation was not included in the bill, though he is believed to be looking for another must-pass bill to attach it to during the lame-duck session.

Whether Manchin’s or other legislation advances, there appears to be bipartisan support for an overhaul of the permitting process.