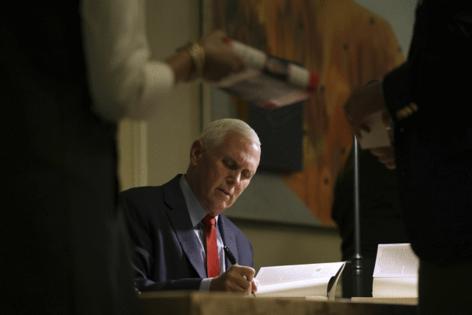 CHICAGO — Former Vice President Mike Pence on Monday denounced former President Donald Trump for dining last week with a pair of antisemitic purveyors, Kanye West and Nick Fuentes, but stopped short of saying whether he thought it should disqualify Trump’s bid to recapture the White House.

Pence, the former one-term Indiana governor before joining Trump’s Republican ticket in 2016, is eyeing his own bid for the GOP nomination for president. But he said a decision won’t come before the holidays.

He also said he hasn’t made a decision to cooperate with the U.S. Justice Department on its criminal investigation into Trump’s actions surrounding the Jan. 6, 2021, insurrection at the U.S. Capitol and Trump’s storing of classified documents at his Mar-a-Lago estate after leaving the White House. But he restated his position not to cooperate with the U.S. House select panel reviewing Trump’s role in fomenting the Capitol riots.

Pence appeared before about 300 people at the Union League Club of Chicago as part of a national tour to promote his autobiography, “So Help Me God.”

The book covers his life in politics, including his six terms as an Indiana congressman, the one term as governor, actions in the Trump administration and the day of Jan. 6 when protesters — some threatening his life — sought to stop his role overseeing the counting of Electoral College votes that officially made Democrat Joe Biden president, despite Trump’s intense public and private pressure on Pence to keep him president.

In his book, released earlier this month, Pence flatly declared: “Donald Trump is not anti-semtic. He’s not a racist or a bigot. I would not have been his vice president if he was.”

But when asked where he would have sat at the dinner table in Mar-a-Lago with West, who goes by the name Ye, and Fuentes, a young purveyor of antisemitic and racist white supremacist thought, Pence paused for several seconds before responding. West was raised in Chicago and Fuentes is from the western suburbs.

“Let me say, I think no president, no former president, no one aspiring to be president should ever associate with antisemites, Holocaust deniers or white nationalists under any circumstances. Now, that being said, the president was wrong to give those two people a seat at his table and I think he should apologize,” Pence said.

Trump has not offered any apology.

Despite Trump’s actions, Pence said he still did not think Trump was antisemetic, noting his daughter Ivanka converted to Judaism in marrying Jared Kushner and his grandchildren are being raised Jewish. Pence also said the Trump White House was the most “pro-Israel administration in American history.”