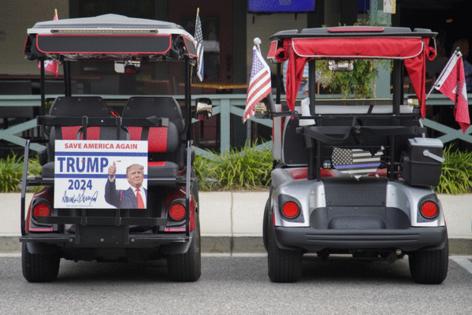 THE VILLAGES, Fla. — The world’s largest retirement community was comfortable with consensus.

If they talked about politics at all, Sherri Lake knew that most of her neighbors voted like her: enthusiastically and down the line Republican.

It made the day after Donald Trump launched another White House run unnerving.

“I supported him when he ran the last time, and I supported him throughout his presidency,” Lake, 77, told her friends while standing among the golf carts outside her local clubhouse. “But I’m not going to vote for somebody who’s gonna lose.”

“I’m waiting to see how he conducts himself,” said Jo Ann Burkett, 73.

“He calls Ron ‘Ron DeSanctimonious!’” said Ismay Czarniecki, 70, of Florida’s governor. She is a member of the Republican Federated Women of The Villages club. “If that’s how he’s starting off ... ”

“He’s got diarrhea of the mouth,” added Lake. She paused. “But I have hopes for (Gov. Ron) DeSantis.”

With square footage larger than Manhattan, The Villages, a sprawling retirement community in Central Florida, has long been considered a Republican stronghold.

The retiree haven increasingly reflects Florida’s changing politics. It isn’t a purple battleground — 75% of its voters are registered Republicans.