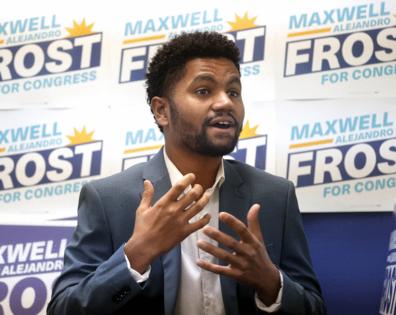 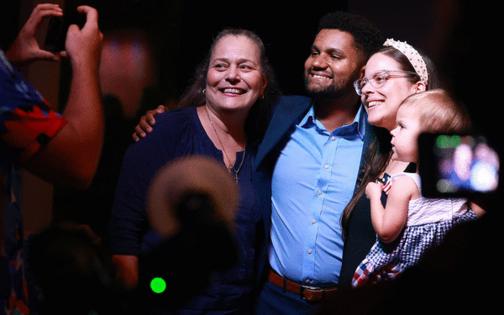 ORLANDO, Fla. — Incoming U.S. Rep. Maxwell Frost has suddenly become one of the most prominent members of his generation. But like many other 25-year-olds, he’s still looking for a place to crash.

“I’m just kind of couch-surfing a bit with friends,” Frost, D-Fla., said of his time in Washington, D.C. “Then hopefully in February or March I’ll be getting a place to live after I get some actual paychecks.”

Frost made national headlines following his Democratic primary win in August as the overwhelming favorite to become the first member of Gen Z in Congress.

Now he’s officially a congressman-elect, having defeated Republican Calvin Wimbish by 20 points in Orange County’s District 10 on Nov. 8. Frost’s last few weeks have been a whirlwind of orientation meetings, news media interviews and encounters with some of the biggest names in politics.

As he prepares to take office in January, Frost has to balance his newfound fame with his status as one of the least senior members of the minority party in Congress.

“Frost is in a unique position, in that unlike most freshmen members of Congress, he’ll be able to grab the national stage when he wants to,” said David Jolly, a former Republican congressman from Pinellas County and co-founder of the Forward Party.

“Patience is going to be his greatest challenge,” Jolly added. “(For) anyone who has been that successful that early, it can be a heavy experience getting elected to Congress. You discover this new confidence, and patience is in short supply.”

Just like in college, new Congress members undergo hours of freshman orientation. But theirs is capped off with a private midnight tour of the Capitol.

“We’re learning about our budget, how to set up our office, the logistical things that you need to know,” Frost said in an interview with the Orlando Sentinel on Monday. “ … And then there’s a lot of social events that go until 11, which are just as important as the classes because that’s where you’re getting to really make good relationships with your colleagues.”