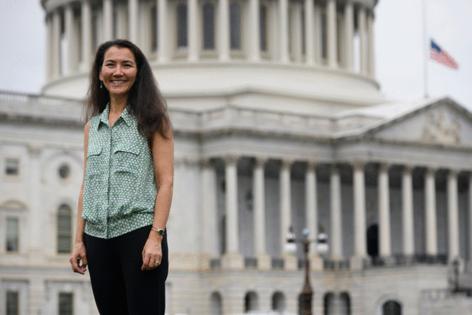 ANCHORAGE, Alaska — Mary Peltola, a Democrat and the first Alaska Native elected to Congress, on Wednesday won reelection to the U.S. House of Representatives. She will now serve a full two-year term after she prevailed in an August special election to serve out the final months of the late Rep. Don Young’s term.

Young died in March, triggering a monthslong race shaped by the question of who would succeed the 49-year Republican congressman. Peltola, a former state lawmaker from Bethel, emerged Wednesday as the state’s pick with nearly 49% of first-choice votes in the ranked-choice November election.

Following tabulation of ranked-choice votes late Wednesday, Peltola had a clear victory over Republican former Gov. Sarah Palin in a 55% to 45% split.

Peltola held hands with her husband, Gene “Buzzy” Peltola Jr. as she watched a livestream of the state Division of Elections announcing results, projected onto a screen at a watch party in downtown Anchorage. Supporters applauded and cheered loudly when her win was announced.

“It’s a two-year contract,” Peltola said afterward. “I will be happy to work for Alaskans again, as long as they’ll have me.”

Peltola made Young’s legacy a key part of her campaign. During her brief stint in Congress before ramping up her campaign ahead of the November election, Peltola — whose parents campaigned and worked for Young — hired former staffers from the Republican’s office in a show of bipartisanship.

Asked about what her win says about Alaskans, Peltola said, “I think it says that Alaskans are ready for an Alaskan to represent them who isn’t spouting the canned messages that we hear nationwide. I think it shows that Alaskans wholeheartedly embrace nonpartisanship and embrace working together and tackling issues that Alaskans face.”

Peltola faced two Republican challengers: Palin, who returned to state politics after a 13-year hiatus since quitting as governor; and businessman Nick Begich III, the Republican grandson of Nick Begich the first, a Democrat who was elected to Congress in 1972 but disappeared in a plane crash.

Palin earned 26% of first-choice votes. Begich earned 23%. Libertarian Chris Bye had less than 2%. Of Begich’s voters, two-thirds ranked Palin second — not enough for her to come from behind and overtake Peltola for the victory.

The race was shaped by bickering between the two Republicans. Palin had backing from former President Donald Trump, who held a rally in Anchorage in July. Begich had support from the Alaska Republican Party. Palin made her disdain for ranked-choice voting a hallmark of her campaign, even as Peltola embraced the new voting method, saying it gives people “a better vote in their democracy.”

In the final weeks of the campaign, Peltola emerged as the front-runner, with a heavy cash advantage over her Republican opponents, boosted by backing from national Democratic leaders and an endorsement from Republican U.S. Sen. Lisa Murkowski, who was also reelected Wednesday.

With a tenure of less than three months in Congress, Peltola has made fish policy and food security key parts of her agenda.