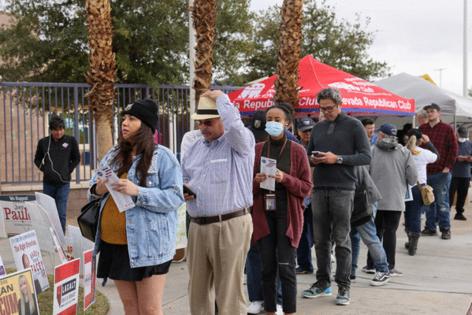 The CNN exit polls, which compared more than 2,900 voter responses in the U.S. Senate race and the governor’s race, showed 62 percent of respondents who identified as Latino voted for Sen. Catherine Cortez Masto over her opponent, former attorney general Adam Laxalt. In the governor’s race, Gov. Steve Sisolak received 62% of the Latino vote, compared to Republican Joe Lombardo’s 37%.

Still, it may be a sign that Latinos are increasingly breaking from the Democratic Party. Latino voters, who made up nearly 20% of the voters in Nevada in 2020 according to Pew Research Center, have historically voted Democratic. But some reports have suggested that support is narrowing, and an October Washington Post-Ipsos poll showed that although Democrats had a 27-point advantage with Hispanic voters, that number was down from nearly 40 points in 2018.

Exit polls have limitations, such as large margins of error, and are better used as a preliminary look at trends in the voting population rather than solid data, said Christina Ladam, a professor of political science at the University of Nevada, Reno.

“You’re going to likely get people who are more to the extremes than the general voting population because these are the people who are comfortable with sharing their views,” she said.

“It’s showing us a preliminary snapshot of what happened, and it kind of gives us a sense of what might have been going on,” he said.