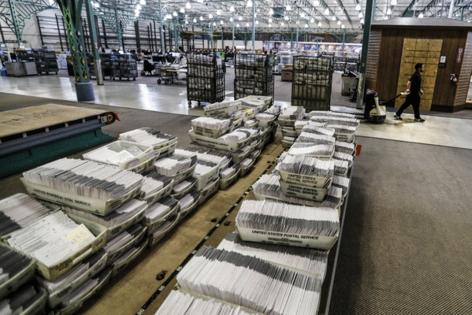 LOS ANGELES — A Los Angeles County deputy district attorney has been placed on administrative leave for his role in the questionable prosecution of a Michigan software executive that may have been sparked by conspiracy theorists who deny the validity of the 2020 presidential election.

Deputy District Attorney Eric Neff's leave comes in the wake of District Attorney George Gascón's decision to drop charges against Eugene Yu, chief executive of Michigan-based Konnech, according to three sources with knowledge of the situation. The sources spoke on the condition of anonymity in order to discuss a personnel matter.

Yu's firm, which has contracts with L.A. election officials, had been accused of storing data about poll workers on Chinese servers.

Gascón announced Yu's arrest Oct. 4, claiming that the 51-year-old chief executive had endangered the personal information — including Social Security numbers — of an unknown number of L.A. County poll workers by storing it on an overseas server.

At the news conference, Gascón did not explain what crime Yu had committed but said the firm had violated its contract with the L.A. County Registrar-Recorder/County Clerk's office.

A week later, Yu was charged with embezzlement and conspiracy, as prosecutors alleged that the contract violation was tantamount to theft of public funds. But by November, prosecutors had dropped all charges against Yu.

During his initial news conference, Gascón did not mention that his office's investigation was sparked by a conversation with one of the founders of True the Vote, a Texas-based nonprofit that has fomented conspiracy theories about the 2020 presidential election.

While Gascón stressed that he had no evidence that any alleged misconduct by Konnech or Yu had an impact on an election or involved ballot counting, the news conference sent a shock through the conservative media ecosystem.

Former President Donald Trump praised Gascón and called on him to dig further into the 2020 election, while far-right commentator Charlie Kirk said Yu's arrest was confirmation of "another election integrity 'conspiracy theory.'"

True the Vote was integral to the debunked documentary "2,000 Mules," which claimed to prove that Joe Biden and the Democratic Party stole the 2020 election from Trump through ballot harvesting. True the Vote this year publicly accused Konnech of taking part in a Chinese government operation to influence U.S. elections. Konnech has since sued the group in federal court for defamation.

NEW YORK — The Trump Organization’s longtime tax accountant told a Manhattan jury Tuesday that had he fully understood how the company paid its executives, he would’ve had a heart attack.

NEW YORK — CNN asked a judge to toss out former President Donald Trump’s defamation suit against the network over its coverage of his 2020 election conspiracy theory and critical reports about his demeanor.

MINNEAPOLIS — Minnesota's newest abortion battleground might be a town of 500 people on the western prairie.

The Kandiyohi County city of Prinsburg is considering an ordinance that would allow residents to sue abortion ...Read More

WASHINGTON — President Joe Biden announced that his administration would extend the pandemic-era pause in student loan repayments through June 30 amid legal challenges to his college debt-forgiveness plan.