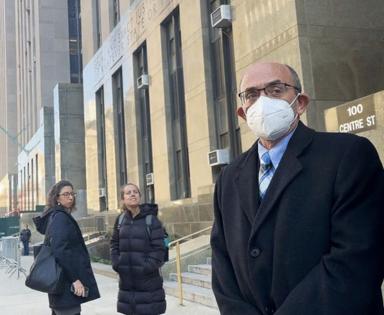 NEW YORK — The Trump Organization’s longtime tax accountant told a Manhattan jury Tuesday that had he fully understood how the company paid its executives, he would’ve had a heart attack.

Donald Bender, a partner at Mazars USA LLP, was the first witness to testify for the defense at the Manhattan district attorney’s tax fraud trial against the Trump Organization. The former president has blamed Bender for not catching the malfeasance.

Jurors have heard how the company’s convicted Chief Financial Officer, Allen Weisselberg, 75, and other full-time executives received millions in yearly bonuses, partially as independent contractors, from different Trump-owned entities — on top of their sizable salaries. By paying its employees as freelancers, the company didn’t have to pay payroll taxes.

Bender said Weisselberg gave him the false impression he did legitimate work for some of the entities as an independent contractor. The accountant testified that he didn’t know Trump’s company was paying its CFO’s rent, utilities and parking garage fees as part of his compensation from 2005 to 2017 — nor that it paid him thousands in cash for Christmas tips for his doorman and furniture for his Florida home. Weisselberg didn’t pay taxes on any of it.

Assistant District Attorney Susan Hoffinger asked Bender how he was sure he’d never seen spreadsheets detailing how the company paid Weisselberg and other executives tens of thousands of dollars in extra compensation.

“Because I probably would’ve had a heart attack,” Bender told Hoffinger on cross-examination.

Bender prepared the Trump Organization’s taxes for about 35 years before his firm cut ties with the business in 2021 because it could no longer rely on the company statements of financial condition. The tax preparer also filed Trump’s taxes from 2011 to 2018 and handled Weisselberg’s and his son’s taxes for several years.

Bender’s testimony that Trump reported almost $200 million in losses in 2010 and $700 million in 2009 marked the first time those numbers have been confirmed publicly since a September 2020 exposé in the New York Times.

The Trump Organization, a holding company that manages around 500 Trump-owned entities, and its subsidiary Trump Payroll Corporation have pleaded not guilty to criminal tax fraud, falsification of business records, conspiracy and other related charges. They face about $1.7 million in fines if convicted — a fraction of what Trump will pay in lawyers’ fees.

The case is among the intensifying legal battles challenging the former president as he mounts a third presidential run.

Hoffinger asked Bender what he would’ve done had he known the company failed to include personal expenses on Weisselberg’s annual wage statement.

“We would have had a serious conversation about continuing with the client,” he said.