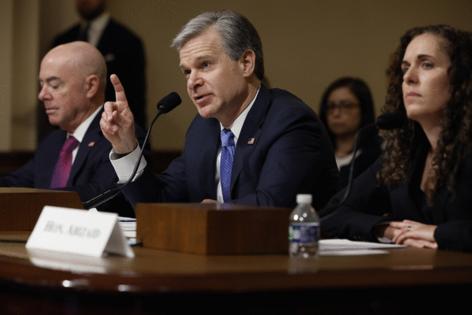 At a press conference near the border in El Paso, Texas, McCarthy called on Mayorkas to resign — then warned that if he does not resign, House Republicans will “investigate” whether to begin impeachment proceedings.

“He cannot and must not remain in that position,” McCarthy said. “House Republicans will investigate. Every order, every action and every failure will determine whether we can begin impeachment inquiry.”

The announcement comes as Republicans prepare to conduct broad oversight of the Biden administration during the 118th Congress. Border security and immigration will be a focus of that oversight, with Republicans eager to highlight how crossings have strained border communities since President Joe Biden took office.

Border agents recorded nearly 2.4 million encounters with migrants during fiscal 2022, the highest number on record, though some of the recorded encounters involve the same migrants making repeated attempts at crossing.

McCarthy also promised to hold committee hearings at the border “so the Democrats can no longer hide from the crisis they have created.”

“Leader McCarthy is right,” Jordan said in a news release after the conference. “Americans deserve accountability for the unprecedented crisis on the southwest border. Republicans will hold Secretary Mayorkas accountable for his failure to enforce immigration law and secure the border through all means necessary.”

“So, we have a plan. We’ve been putting that forward. McCarthy has no plan. The Republican Party has no plan,” Jean-Pierre said.