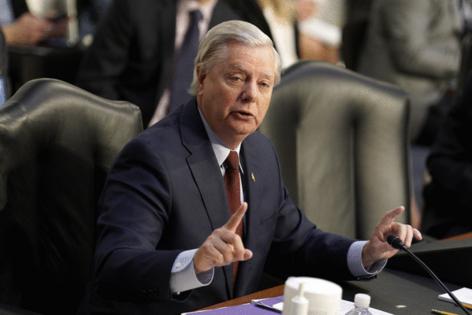 ATLANTA — After more than four months of fighting his summons in court, U.S. Sen. Lindsey Graham on Tuesday testified for more than two hours before a Fulton County special grand jury investigating whether former President Donald Trump or his associates criminally meddled in Georgia’s 2020 elections.

The South Carolina Republican arrived at the Fulton courthouse unseen by reporters, but his office later said the senator answered all questions posed to him. It declined to comment on the substance of the inquiries “out of respect for the grand jury process.”

“The Senator feels he was treated with respect, professionalism, and courtesy,” his office said in a written statement.

Graham was scheduled to appear later Tuesday at a campaign event for U.S. Senate hopeful Herschel Walker in Powder Springs.

No witness had fought his or her grand jury summons as forcefully as Graham. He appealed aspects of his challenge all the way to the Supreme Court, vowing to do “whatever needs to be done to make sure that people like me can do their job without fear of some county prosecutor coming after you.”

He was all but forced to appear in Atlanta after Supreme Court justices on Nov. 1 lifted a stay on his grand jury questioning. Any witness who misses their testimony date and isn’t in the middle of an active appeal could face legal consequences, such as a warrant for their arrest so they can be taken to Atlanta to testify.

Grand juries work in secret, and not even Graham’s lawyers were allowed in the room when the senator was being questioned by the 23-person panel.

Jurors and the prosecutors advising them previously said they were interested in questioning the Trump ally about two phone conversations he had with Georgia Secretary of State Brad Raffensperger about mail-in ballots in the weeks following the 2020 elections.

There has been significant disagreement over what Graham, then the chairman of the Senate Judiciary Committee, was implying during the calls. Prosecutors believed the senator suggested “reexamining certain absentee ballots cast in Georgia in order to explore the possibility of a more favorable outcome for former President Donald Trump.”

Graham insisted he did nothing wrong. He said he was participating in routine legislative fact-finding that’s shielded from questioning under the U.S. Constitution’s “Speech or Debate” clause.