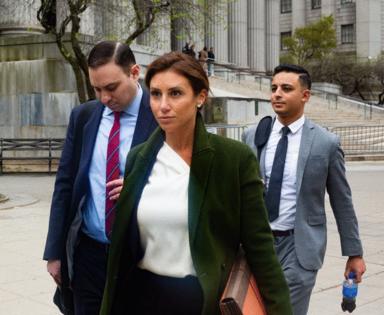 At a fiery hearing in state Supreme Court in Manhattan, Justice Arthur Engoron laid out a roadmap for Attorney General Letitia James’ case against the Trump Organization. He set a firm trial date of Oct. 2, 2023, over objections from Trump’s lawyers, who want more time to prepare.

Assistant Attorney General Kevin Wallace said the Trump team’s defense strategy was to “delay, delay, delay” the lawsuit by jamming it up with unnecessary filings to push it back to 2024. Wallace said their tactics included “playing games about whether or not they’ve actually been served.”

The accusations were made after a burst of legal motions Trump’s lawyers filed late Monday seeking to dismiss the case, which Judge Engoron said gave him “déjà vu.”

Trump’s New Jersey-based lawyer Alina Habba — who rolled her eyes throughout the hearing — took personal aim at Engoron, accusing him of being “improper” and harboring bias against Trump. Her late-night motions to dismiss the case levied similar allegations at Attorney General James, describing her suit against the Trump Organization as a “highly-politicized (farce)” and a power grab.

“Like a river that threatens to break the banks and take the village under, the prosecutorial power of the state must be constrained,” the motion said.

“(It) cannot be reasonably disputed that (James) has displayed a wanton desire to harass, intimidate, and retaliate against Defendants,” reads a later section.

Trump filed a lawsuit making similar allegations against James in Florida in October. His lawyers described her as “a political hack” who had “her fingers crossed behind her back” when she swore to support the Constitution.

James’ sweeping Sept. 21 lawsuit accuses Trump, his executive children, Ivanka, Eric, Don Jr., and other senior Trump Organization staffers of engaging in widespread fraud for at least a decade. It describes an illegal company practice of misrepresenting the value of its assets — like Trump’s signature skyscrapers and golf courses — by hundreds of millions of dollars.

By lying about properties costing less or more than they were worth, James says Trump’s company scored around $250 million in ill-gotten loan terms and tax breaks based on false information, according to her suit. James says Trump exaggerated his net worth by “billions.”

Engoron has appointed retired Manhattan Judge Barbara Jones to oversee the company until the case’s resolution, which Trump’s lawyers have appealed.