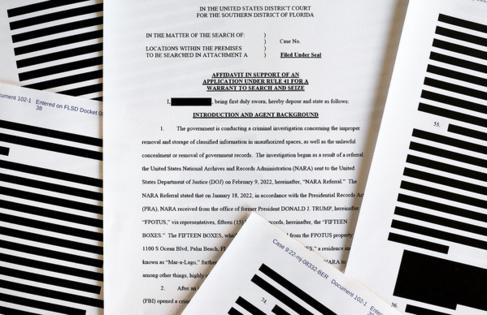 WASHINGTON — Former President Donald Trump asked a federal judge to order the U.S. Justice Department to provide his lawyers with an unredacted version of the August affidavit used to secure a search warrant for his Mar-a-Lago estate.

Trump made the request in a filing Tuesday in federal court in Florida before the same judge who appointed a so-called special master to review thousands of documents seized by the FBI from the former president’s home during the search.

Trump’s lawyers seek to review the affidavit to ensure there were no “material omissions” or “factual or legal errors” relating to the history of Trump’s purported cooperation with the probe into White House records that the former president took with him after leaving office, according to the filing.

Trump also renewed his argument — which the government disputes — that he was permitted to declassify any White House records he wanted and take them with him. The search uncovered about 100 documents with classified markings — some of them top secret.

“In addition, the affiant should have fully disclosed and discussed the total authority of a President to declassify materials and determine that materials are personal records under the Presidential Records Act, as well as the fact that presidents are accorded great deference when they have designated materials as either a Presidential record or a personal record,” according to the filing.

The motion comes as Trump’s lawyers prepare to argue in federal appeals court to affirm the decision appointing the special master, which the government is challenging.

Trump also pointed to a government inventory of the seized material — and his lawyers’ own review of those items over the last several weeks — as evidence that the warrant was too broad.

“The fact the Government took a huge volume of personal and family photographs, newspapers, thank-you notes, campaign materials, books, and golf shirts demonstrates that this search and seizure was nothing more than a general ransacking,” Trump’s lawyers argued. “This raises serious questions about how the affiant characterized his or her assertion of probable cause and the justification for seizing thousands of personal and private items.”

The Justice Department has pointed out in previous court filings that there is nothing unusual about the seizure of personal items during searches in criminal investigations, and that items found in or near boxes containing relevant documents can illuminate a probe.