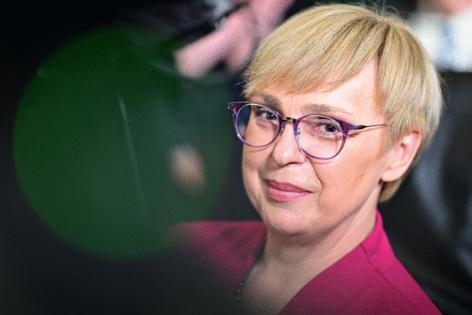 Pirc Musar, who once served on the legal team of former U.S. First Lady Melania Trump, won 54% in Sunday’s runoff, according to results with 93% of votes counted. Anze Logar, a conservative former foreign minister who served in Jansa’s right-wing government, won 46%.

The victory extends the unbroken string of presidential victories by left-leaning candidates that stretches back to the Balkan state’s formation in 1991. It will also help Prime Minister Robert Golob fulfill his vow to reverse sweeping changes made by Jansa’s government that were criticized for undermining democracy.

“I believe in democracy, human rights, in tolerant dialogue,” Pirc Musar said before declaring victory. “There is a lot of work to be done.”

While the presidential post is largely ceremonial, the contest underscored the continuing battle in Europe between pro-EU political forces and parties that have challenged the bloc’s liberal, multicultural values in an environment of runaway inflation and tensions over the war in Ukraine.

The next head of state in the country of 2.1 million has the potential to significantly influence the direction of the country by naming six new judges to the nine-member Constitutional Court. While candidates are subject to parliamentary approval, any disagreement between the assembly and the president could block activity at the court.

The ballot represents a rebuke for Jansa, who was unseated in April elections. His opponents accused him of polarizing the former Yugoslav republic’s political environment with vulgar attacks against opponents and the media and by undermining state institutions including the courts, police and public media.

“Jansa has lost another election,” said political analyst Alem Maksuti. Pirc Musar will be more vocal in giving Golob legitimacy in dismantling changes made by Jansa, he said.

In her law practice, the 54-year-old Pirc Musar has worked as a staunch advocate for rights of the LGBTQ community. She also worked for Melania Trump, who was born in Slovenia and has citizenship, on trademark issues and when she sued a tabloid in a libel case that was settled for an undisclosed amount.

At the same time, she faced media scrutiny over her role in her husband’s business empire, which her opponents accused of using tax havens to build wealth. Both deny wrongdoing.

While the president is commander in chief and proposes constitutional judges, central bank governors and high-ranking diplomats, the role has little executive power. Most decisions are ultimately made by the premier and his cabinet and approved by parliament.