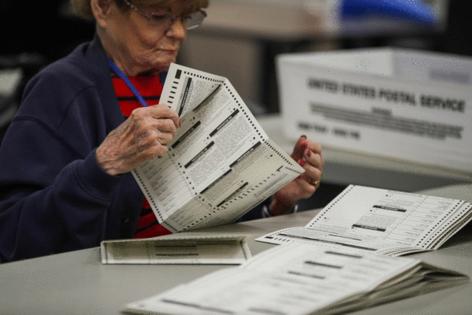 Election workers continue to tabulate ballots in several counties, including Maricopa, the state’s most populous and vote-rich. Officials have asked for patience, stressing in daily news conferences that the process is unfolding at a normal pace and in accordance with the law.

But that hasn’t stopped a barrage of increasingly cynical conspiracy theories from some Republicans, including former President Donald Trump, who has endorsed and campaigned with Lake.

On Friday, Masters said he would not concede until “every legal vote is counted.” That same day, Fox News host Tucker Carlson asked Lake what she thought of social media posts that suggest her opponent didn’t campaign aggressively because she planned to cheat.

Lake said she understood the reasoning behind the online discussions and leveled criticism of election administration under Hobbs, who is Arizona’s secretary of state.

“We’ve had such terrible elections. They’re run poorly. They’re ripe with fraud,” she said. “Our elected officials tell us that if we dare bring it up we’re conspiracy theorists, we’re election deniers. Darn it, we’ve got to start bringing this up.”

Election officials in Arizona, particularly in Maricopa County, have been working overtime to combat criticism, misinformation and insinuations of malfeasance as they work through hundreds of thousands of mailed ballots returned on Election Day.

Much of the vitriol has come from Lake, her campaign and her allies, who in addition to Trump include conservative pundits such as Carlson, Charlie Kirk and former Trump adviser Stephen K. Bannon, who appeared with her at a rally on Nov. 1. Her supporters have used social media and appearances on conservative media outlets to belittle election officials and accuse them of “slow rolling” the results.

Lake has said in those interviews that she has “100%" certainty that she will win the race, and has not committed accepting the election result if she doesn’t. One of her first acts as governor, she said, would be to call a special legislative session to overhaul the state’s voting system and move away from early ballots.