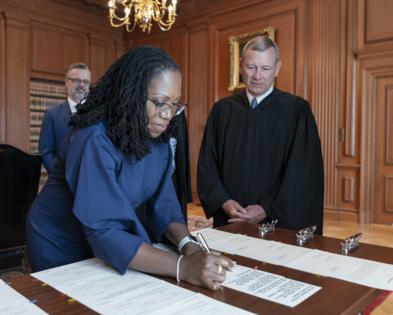 Legitimacy. The word has dominated discussion of the U.S. Supreme Court for years. Some, mostly on the left, claim that the court has lost its legitimacy. The debate on this question even has spread to the court itself, with comments on the matter made by Justices Elena Kagan, John Roberts and Samuel Alito over the summer.

But what does it mean for the current court to be illegitimate? Illegitimacy describes one or both of two conditions: First, it refers to someone occupying a position to which he or she possesses no right. Second, illegitimacy pinpoints the exercise of one’s power in ways flagrantly beyond its proper scope, so much so as to involve powers entirely foreign to the office.

Critics of the Supreme Court make both claims regarding its legitimacy. They argue the last three justices to be appointed — Amy Coney Barrett, Brett Kavanaugh and Neil Gorsuch — have no right to their seats. They further declare that recent decisions, especially during the court’s last term, go so far outside the court’s rightful powers as to make the institution itself illegitimate.

They are wrong on both counts. First, they morph the meaning of legitimacy into conformity with their preferences. They say that, in 2016, then-Senate Majority Leader Mitch McConnell never should have refused to confirm President Barack Obama’s nominee to replace Justice Antonin Scalia, a move that led to Gorsuch’s appointment in 2017. They also claim that the unproven accusations made against Kavanaugh by Christine Blasey Ford disqualified him. Finally, they chafe at President Donald Trump’s nomination of Barrett to replace Ruth Bader Ginsburg, coming as it did right before the 2020 presidential election.

None of these accusations has anything to do with real legitimacy. In each case, the appropriate and constitutional process was followed. A sitting president made the nomination. The Senate either refused its consent, as it did in 2016, or gave it, as the body did in the cases of Gorsuch, Kavanaugh and Barrett. That is the only standard for a justice’s legitimacy to be on the court. It is the only one because it is the constitutional one, the dictate of the supreme law of the land.

We may debate the fairness of refusing a vote on Obama’s nominee. We can argue over the merits of the accusations against Kavanaugh. We even can question the choice of not waiting for the people’s decision in 2020 before adding a new member to the bench. But even if all these objections were right, they would not make any of the appointed justices illegitimate.

On the second count, the court’s last term did not render it an illegitimate institution. Those accusers again seek to replace constitutional standards with their own opinions. To be sure, the court announced monumental decisions last term on a host of hot-button issues concerning religious liberty, gun rights, the administrative state and, of course, the abortion precedents of Roe v. Wade and Planned Parenthood v. Casey.

Yet, too many attack these decisions based on whether they follow popular opinion. Kagan, for one, argues, “If, over time, the court loses all connection with the public and with public sentiment, that is a dangerous thing for democracy.” The court’s role, however, isn’t to follow the lead of often-flawed opinion polling. The justices follow the people’s will insofar as that will is expressed through the law — the Constitution and subordinate congressionally passed statutes. Both get their ultimate origin in “we, the people.” In this written form, they encompass a much more stable and discernible articulation of public sentiment.

Kagan also critiqued the majority’s approach to ascertaining the people’s will as expressed through law, indicating that the majority hide behind claims of impartially applying the words of laws as written in order to realize their policy preferences. “If you’re a textualist, you’re not a textualist just when it’s convenient. You’re not a textualist just when it leads to the outcomes that you personally happen to favor,” she said.

This accusation doesn’t hold up to scrutiny when turning to particular cases. Justices will certainly disagree on the precise meaning of legal texts. But in last term’s decisions, the majority painstakingly parsed the words of the laws and the accompanying history. They then ruled not on the basis of their partisanships but on what the law meant at the time of its composition. The abortion ruling did not outlaw terminating a pregnancy, as anti-abortion rights activists would want, but merely returned the decision to the political process. The court’s decision on guns made extensive use of history to understand the nature of that right in relation to current law. Finally, the court’s limiting of the administrative state defended the principles of separation of powers and consent of the governed that are essential to our constitutional framework.

Critics of the current Supreme Court should be more honest in their attacks. They object to how certain justices were nominated. They disagree strongly with the court’s recent decisions. But, even if true, neither makes the current court illegitimate. They’d be better served to focus their arguments on the majority’s decisions and reasonings.

Given the rightness and strength of both, critics are in for an uphill battle.

Adam Carrington is an associate professor of politics at Hillsdale College in Hillsdale, Michigan.