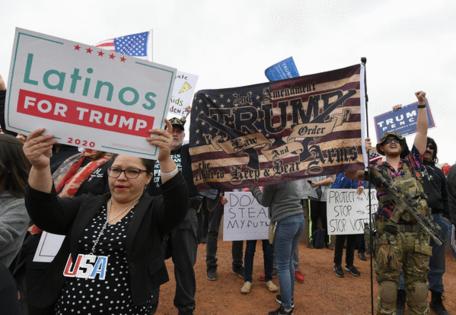 MIAMI — With about a month left until Election Day, former President Donald Trump touted his administration’s accomplishments as he courted a crowd of conservative Latinos in Miami, home to a growing community of Republican Hispanic supporters in Florida.

During his nearly hour-long keynote speech at the America First Policy Institute’s Hispanic Leadership Conference, Trump — who isn’t on the ballot but is expected to run for president in 2024 — slammed President Joe Biden’s immigration policies and inflation, while emphasizing his support among Latinos. In 2020, Trump’s support among Hispanic voters in South Florida buoyed his numbers throughout Miami-Dade County and ultimately helped him win comfortably in the state.

Since then, Florida Republicans — with some financial backing from Gov. Ron DeSantis — have doubled-down on those gains statewide and surpassed Democrats in voter registration numbers for the first time in recent Florida history. The party now has a greater-than 1% advantage over Democrats among registered voters in Florida, according to a Miami Herald analysis of state voter data.

In majority-Hispanic Miami-Dade County, Democrats have lost over 1,500 voters since 2018, while Republicans have gained over 3,300 new party members.

“It’s just a great community ... I know it’s going more and more for Trump, but I think it’s gotten more and more for the Republican Party,” said Trump, who spoke Wednesday afternoon at the InterContinental Hotel in downtown Miami.

“And they should be, actually, when you look at what’s happened,” he added.

Between tangents about the FBI raid on his Mar-a-Lago home and foreign policy, Trump said his own hardline immigration policies — namely, building a wall all along the southern U.S. border — are widely supported by Hispanic voters.

“One of the worst lies of the radical left is that Hispanic Americans want open borders. See, when I ran, I was talking about a wall,” Trump said. “But what they said is, ‘Oh, you’re going to lose the Hispanic-American vote.’ I said, but I have to do what’s right. And it was just the opposite ... And we had the best numbers ever.”

The two-day Hispanic Leadership Conference event, which featured panels on building out support in Hispanic communities across the country, was co-hosted by Bienvenido and Hispanic Impact Panel. Cuban-American Republican lawmakers from South Florida, including U.S. Reps. Mario Diaz-Balart and Carlos Gimenez, were also in attendance.

“Hispanics are rallying to our cause for a simple reason, because you love America and you believe in America. And you know that the time has come to stand up and defend America and everything it stands for,” Trump said during his Wednesday speech.

A few hours away from Trump’s speech, on the west coast of the state, Biden was also in Florida surveying the damage left behind by Hurricane Ian and pledging federal support during a meeting with DeSantis. The two leaders — who’ve often sparred over political differences, including immigration — held an amicable meeting and praised each other’s responses.

During his speech, Trump expressed his sympathies for the victims who were affected by Ian’s landfall in the state. He went on to praise Hispanic communities for their contributions in the U.S.