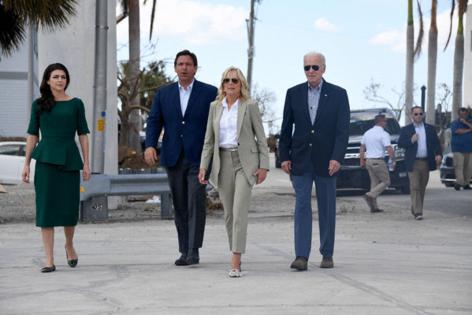 “I wanted to tell you in person that we’re thinking of you and we’re not leaving. We’re not leaving until this gets done. I promise you that,” the president said at Fisherman’s Wharf in Fort Myers Beach. “After the television cameras have moved on, we’re still going to be here with you."

“I promise you: We’re going to be here every step of the way,” he added during remarks in front of twisted wood of what was, until the hurricane, the outside dining area at Dixie Fish Co. restaurant.

He spent about three and a half hours in the region, viewing the destruction from the air; getting a briefing on the response and recovery efforts from federal, state and local officials; talking to first responders and recovery workers; and meeting with people affected by the storm.

The president embraced several of the people whose stories he heard.

“So many families in these communities, their homes are destroyed,” Biden said after speaking with the residents and small-business owners.

He lamented what the storm did to Fisherman’s Wharf, where there used to be thriving restaurants and shops. “Now they’re wiped out.”

“This historic, titanic and unimaginable storm just ripped it to pieces. You’ve got to start from scratch,” he said. “It’s going to take a lot of time, not months or weeks, but years for everything to get squared away in the state of Florida.”

Biden’s personal meetings — with residents and business owners affected by Hurricane Ian, plus crews working on rescues, restoring power, distributing food and water and removing debris — represent one of the most important parts of a president’s job: serving as the nation’s consoler in chief.