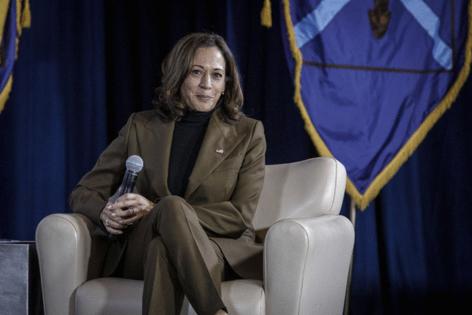 NEW BRITAIN, Conn. — With 34 days before the election, Vice President Kamala Harris traveled to New Britain on Wednesday to show her support for the most controversial issue in the divisive campaign — abortion rights.

Harris appeared on stage for a roundtable discussion in a small theater with U.S. Rep. Jahana Hayes, a Democrat who is locked in a tight battle with Republican George Logan in the 5th Congressional District. Politico now rates the race as a “toss up’' in Connecticut’s closest Congressional contest of the campaign season.

“This is not a political event, but it is a fact that in 34 days there is a midterm coming up,’' Harris told the crowd. “The facts must be spoken.’'

At another point, Harris looked at Hayes and told the crowd : “Please send her back to Congress.’'

Toward the end of the roundtable discussion, Harris delivered a statement that drew some of the most applause of the day.

“One does not have to abandon their faith or their beliefs to agree that the government should not be making that decision for her,’' Harris said.

Harris spoke at Central Connecticut State University in front of a live audience with Hayes and Alexis McGill Johnson, who earned a master’s degree in political science from Yale University and has taught at both Yale and Wesleyan University in Middletown. They spoke for about 35 minutes in the theater, where attendees had their bags searched by the U.S. Secret Service and dogs under tight security.

The event was livestreamed.

Abortion has been a major issue in the battle between Hayes and Republican George Logan, a former state senator who supporters believe is the party’s best candidate in the 5th Congressional District since then-state Sen. Andrew Roraback in 2012. Democrats have won every election in the district, which stretches from Simsbury to Danbury to the Massachusetts border, starting in 2006 with an upset victory by Democrat Chris Murphy.

Even though Harris is supporting a fellow Democrat in the midst of the campaign, the vice president’s office said she was making an official trip, not a campaign appearance. Hayes told reporters after the event that she could have held a fundraiser with the vice president, but Hayes declined and instead chose to talk about abortion at the university.