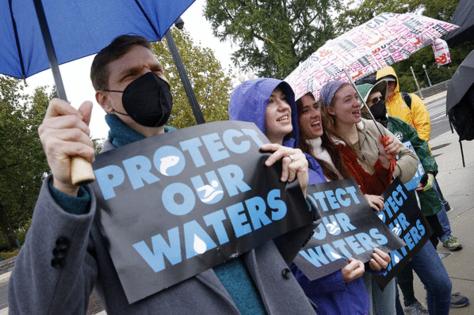 WASHINGTON — The Supreme Court opened its new term on Monday by hearing a property rights appeal that calls for limiting the government’s power to protect millions of acres of wetlands from development.

At issue is whether the Clean Water Act forbids polluting wetlands and marshes that are near — but not strictly part of — waterways.

Justice Ketanji Brown Jackson in her first day on the bench led the way in questioning why the court should move to limit the protection for wetlands.

She said Congress in 1977 said wetlands that are “adjacent” to rivers and bays should be protected. Congress intended to protect “the integrity of the nation’s waters,” and lawmakers believed that included protecting nearby wetlands and marshes that could affect those waters, she said.

Justices Elena Kagan and Brett M. Kavanaugh said they agreed with that view.

Kavanaugh said that seven administrations — Republican and Democratic — had taken the view that wetlands were protected if they were near a waterway.

But several of court’s conservatives said property owners should not be subject to federal controls simply because their land has water on it or near it.

The justices spent two hours in a lively debate over how to define when property owners need a permit from the Environmental Protection Agency before they can develop such land. It was unclear how the majority will rule.

Congress passed the Clean Water Act 50 years ago, but there has been a continuing dispute over whether federal authority extends to marshy areas or seasonal streams that are near a river, lake or bay.

Builders, developers and farmers have complained about what they see as an overreach by federal regulators. They point to an Idaho couple who were blocked from building a home on a vacant lot that sat across the road from scenic Priest Lake.

Michael and Chantell Sackett bought the lot in 2004. After excavation work, they dumped gravel and sand in a soggy part of the lot as a first step toward building a home.

But in response to a 2007 complaint, an official from the EPA warned them their land contained protected wetlands.

The Pacific Legal Foundation in Sacramento, California, took up the Sacketts’ case and urged the Supreme Court to rein in the law.

“The Sacketts’ property contains no stream, river, lake, or similar waterbody,” the group argued in its brief. “The Sacketts’ ordeal is emblematic of all that has gone wrong with implementation of the Clean Water Act.”

In defense of the EPA, Justice Department lawyers said “wetlands such as swamps, bogs, marshes and fens ... play a critical role in regulating water quality. They provide flood control and trap and filter sediment and other pollutants that would otherwise be carried into downstream waters.”

The court’s conservative majority has shown itself to be skeptical of broad federal regulation. In June, the court blocked the EPA from adopting rules that would fight climate change by forcing a shift away from coal-fired power plants.

The Natural Resources Defense Council argued that wetlands are crucial because they “keep rivers, lakes, and streams clean. And they reduce flood damage and provide invaluable habitat for the nation’s abundant wildlife.” If the court limits the scope of the law, “tens of millions of acres and countless other waters will lose federal safeguards that protect the health of our nation’s waterways,” the group said.