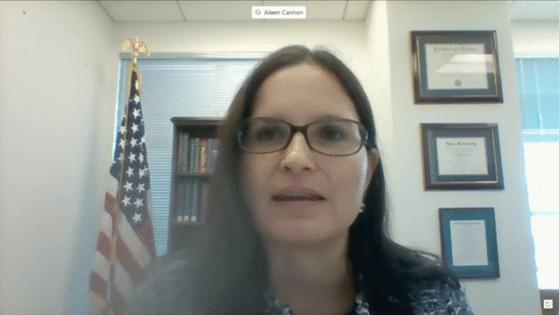 First, U.S. District Judge Aileen Cannon, a Donald Trump appointee, granted the former president’s request for a “special master” to review documents he took from the White House, a baffling decision derided by legal experts across the political spectrum. Worse, Cannon ruled that the FBI couldn’t have access to classified documents, thwarting a probe with national security implications — another head-scratching stance that an appeals court later overturned in blistering language.

Then, last week, Cannon overruled the special master that she herself appointed, saying Trump’s lawyers don’t have to provide evidence of his baseless claim that the FBI “planted” documents in his home. It has become glaringly obvious that this judge shares Trump’s corruptly transactional approach to politics. She shouldn’t preside in this case.

Trump has offered multiple unlikely explanations for why he took and stored classified federal documents (some of which dealt with nuclear weapons) at his Florida home and refused to return them until they were finally retrieved during a court-ordered search. He has claimed executive privilege, which doesn’t apply to ex-presidents. He has claimed that presidents have the power to declassify documents just “by thinking about it.” He has suggested, with zero evidence, that the FBI planted documents in his home during his search.

What self-respecting judge would tolerate such nonsense? Why, Cannon, whom Trump nominated late in his term and whose thin résumé includes membership in the Federalist Society, the right-wing activist breeding ground of so many of Trump’s judicial appointees.

Still, even most Trump-appointed judges have admirably upheld their duty to unbiased interpretation of the law. In fact, Trump appointed two of the three-judge appellate panel that found Cannon “abused (her) discretion” in suspending the FBI’s probe of the documents.

But Cannon wasn’t done carrying Trump’s water. On Thursday, she ruled that Trump could ignore a decision from the special master — whom she appointed at Trump’s request — that would have required Trump’s lawyers to either prove his false claim that the FBI planted documents, or quit claiming it. In other words, said Cannon, Trump is free to continue muddying the case with innuendo without having to back it up.

Appellate courts can reassign cases to different judges based on bias, though that’s an extreme step that isn’t usually undertaken merely because a judge’s rulings favor one side and don’t make legal sense; generally, the remedy for that is to get those decisions overturned on appeal. But this is an unusual case in that Cannon’s apparent bias may have jeopardized national security in her attempt to stall the FBI’s investigation into the contents of the classified documents.

The Justice Department should ask Cannon to recuse herself, and if she refuses, it should appeal for reassignment of the case. This is too important to leave on the docket of someone whose loyalty is clearly to Trump instead of the law.