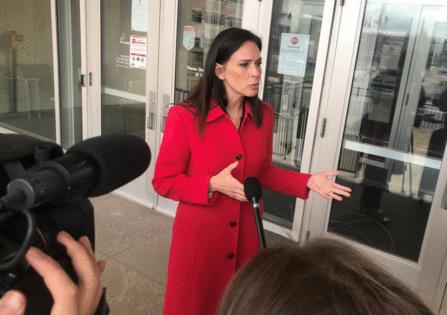 WARREN, Mich. — Former President Donald Trump encouraged Michigan voters to support his slate of Republican candidates during a rally in Macomb County on Saturday, saying they could "save the day" in the battleground state.

“These people hate our guts because they are terrified of this political movement,” Karamo said as Trump stood nearby.

“There is nothing they can do to stop this MAGA movement," Karamo added.

Trump said his political movement was standing up to "menacing forces." He spoke in front of a crowd of a few thousand people for about an hour and 40 minutes. He criticized Democratic Gov. Gretchen Whitmer, calling her a "radical abortionist," he targeted a handful of investigations into his actions and he even labeled some fellow Republicans as weak.

"Too many Republicans are weak and they’re afraid," Trump said at one point. "And they better get strong fast, or you’re not going to have a Republican Party.”

Talking to reporters, Dixon said her campaign was "within striking distance" of Whitmer.

The event took place 38 days before a pivotal election, in which the GOP is hoping to unseat three Democrats who control the executive branch of state government.

Dixon, a political commentator and businesswoman from Norton Shores, spoke for about 25 minutes before Trump took the stage at 7:15 p.m. Dixon used her speech to criticize Whitmer for running what she described as a "basement campaign" and vowed to make Michigan's schools the best in the nation.

"After all of the spending, we’re still within striking distance," Dixon told reporters afterward. "I think it means that our message is resonating and she doesn’t really have a message.”