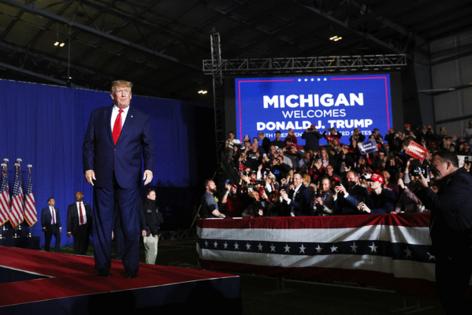 DETROIT — Former President Donald Trump is scheduled to return to Michigan Saturday with Republicans in the state hoping he can motivate his base of supporters and help secure Macomb County, a key area the GOP needs to win in November.

Trump will speak at 7 p.m. Saturday night at the Macomb County Community College Sports and Expo Center in Warren. It will be his first rally in Michigan since April 2 and will take place 38 days before the Nov. 8 election.

The event will be helpful to GOP candidates because Trump has a unique ability to activate a segment of the state's electorate, argued Jamie Roe, a Republican political consultant who resides in Macomb County.

"We are in base voter activation mode," Roe said. "And this most certainly will activate Republican voters to get out and vote."

But Whitmer's campaign has maintained a significant fundraising edge over Dixon and a lead in polls. Whitmer was up by 13 percentage points, according to an Aug. 29 through Sept. 1 survey by The Detroit News and WDIV-TV. The poll had a margin of error of plus or minus 4 percentage points.

Trump did a Thursday interview on WOOD Radio's "West Michigan Live." Host Justin Barclay asked Trump if he would run for president again in 2024.

"In my mind, I've made a decision," Trump replied. "I think people will be very happy. ... As far as announcing, it won't be in the very long term."