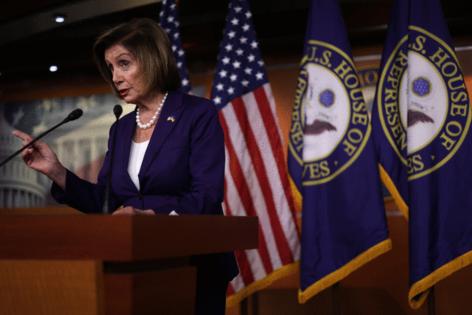 The U.S. government narrowly averted a midnight shutdown of most federal agencies when the House passed a short-term spending bill hours before the deadline.

The stopgap bill, which the Senate passed Thursday, passed 230 to 201 and now heads to President Joe Biden’s desk for his signature. But Republican opposition in the House forecasts potential turmoil when the legislation expires Dec. 16, especially if the GOP wins control of one or both chambers in the November midterms.

Republicans said they had no role in crafting the measure and wanted a stopgap bill that extended into next year instead. Forecasts favor Republicans taking the majority in the House in January and a longer stopgap would have given the party more say in any final 2023 spending decisions.

“They did not ask for any new money for border patrol agents to address this Biden-created crisis on the southern border,” said Oklahoma Republican Tom Cole in a floor speech opposing the bill.

Democrats said the GOP opposition reflects a cavalier attitude toward government shutdowns that led to the longest closure of the federal government in history in 2018 and 2019 when President Donald Trump and the GOP tried to use a 35-day shutdown to force Democrats to accept border wall funding.

“We think it is unacceptable to ever shut the government down,” Massachusetts Democrat Jim McGovern said.

The stopgap bill provides $12 billion to help Ukraine defend against Russia’s invasion, $2 billion for domestic disaster relief, $2.5 billion for New Mexico wildfires and $1 billion in home heating assistance. Language in the bill allows the Federal Emergency Management Agency to access about $35 billion in disaster relief funds that should speed aid to victims of Hurricane Ian.

The path was cleared for Senate passage of the bill after Senate Majority Leader Chuck Schumer and West Virginia Democrat Joe Manchin dropped an effort to include permitting changes. Manchin was unable to assemble 60 votes for his energy permit changes in the face of opposition in both parties. Manchin told reporters he plans to try to negotiate with Republicans to revive a new version of his bill for possible inclusion in an annual defense policy bill coming to the Senate floor after the election.

At the request of Republicans, $27 billion in funding requested by the White House to fight COVID-19 and the monkeypox outbreak was also excluded.

A stopgap measure is needed to keep the government running past the Oct. 1 start of the fiscal year because Congress has failed to pass any of the 12 annual spending bills for fiscal 2023. The House passed six bills and the Senate took up none of them.

Friday’s votes were the last the House plans to conduct before the November midterm elections.