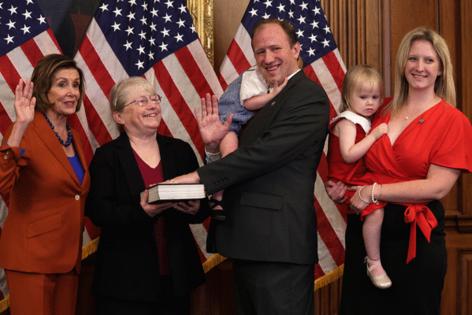 He will have a bit more time than that, but the New York Republican will serve in Congress for just four short months.

“My first two days on the Education and Labor Committee, I think I spoke more than any member of the committee other than the chairman and the ranking member, just because I don’t have time to waste,” he says.

Sempolinski was a staffer for years, working on campaigns and as district director for his predecessor, former Rep. Tom Reed. He had political ambitions himself, but when his onetime boss resigned from Congress after sexual harassment allegations, Sempolinski pivoted to winning the special election.

As a former staffer, he could hit the ground running, he says. And the way he sees it, “district directors make the best members of Congress.”

His staffing days aren’t over yet. After serving his time on Capitol Hill, Sempolinski plans to go back to his most recent job — chief of staff for a New York assemblyman.

Q: What was your earliest experience working on a political campaign?

A: I was going golfing with a friend, and he’s like, “Oh, my mom’s got this new job, and they need somebody to help out for the summer.” A week later, I’m helping out a guy running for county legislature and a guy running for city council. That was the summer of 2003, and it was an internship.