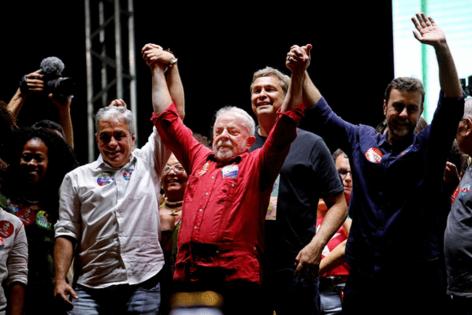 The front-runner has now 50% of valid votes in the first round, which excludes null and blank ballots, according to the survey published Thursday evening. A candidate needs more than 50% to avoid a runoff.

Three days before the polls open, Brazilians are closely watching whether Lula, 76, can manage to amass the support to beat incumbent President Jair Bolsonaro in single round. Already, a slew of polls have showed the leftist challenger within striking distance of doing so.

The survey by Datafolha, Brazil’s most influential pollster, further raised the stakes in a televised presidential debate scheduled later Thursday evening. It is the last time contenders will square off before the ballot, and a strong performance by Lula could push him over the line, analysts say.

Support for Bolsonaro, 67, appears to have stalled, leaving him a distant runner-up with 36%, the poll found.

In a second and final round, Datafolha forecasts Lula handily defeating Bolsonaro

Datafolha interviewed 6,800 people across Brazil between Sept. 27 and Sept. 29. The poll has a margin of error of 2 percentage points.