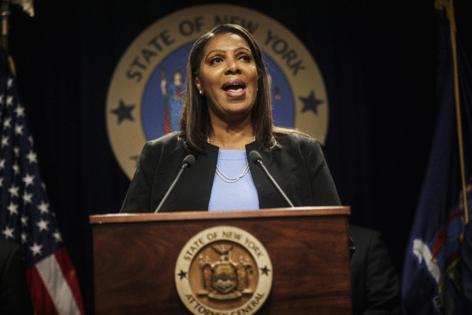 James filed a letter with a New York state judge Thursday saying she intends to seek an expedited conference to set the trial date.

Because the case “involves allegations of an ongoing scheme and conspiracy to obtain obtain millions of dollars through fraudulent activity, and that defendants repeatedly have sought to delay the conclusion of OAG’s investigation, it is imperative that this case proceed quickly,” James said.

Last week, James sued Trump, three of his children and the family company, accusing them of inflating the value of his real estate company’s assets. Trump has said the case is “another witch hunt by James.”

Engoron has been overseeing a parallel dispute during the past two years over subpoenas issued by the state, and the case should remain with him “in the interest of judicial economy,” James said.

“While the legal issues before Justice Engoron were tied to the enforcement of investigative subpoenas, the factual issues overlapped almost completely with the allegations in the complaint in this action,” the attorney general said.

Do you remember that Donald Trump has already thrown his hat in the ring for the 2024 presidential election? Odds are it slipped your mind, on account of more-or-less general indifference not only from a media that seems ...Read More

It didn’t matter to the mail ...Read More