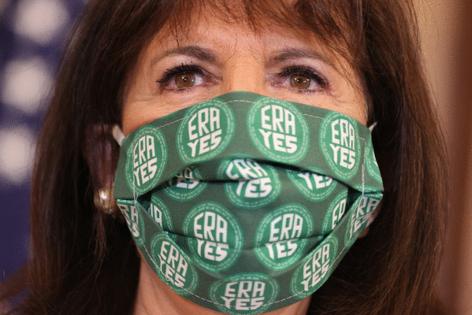 President Joe Biden, Vice President Kamala Harris and Attorney General Merrick Garland have expressed concern over women’s rights. They’ve offered their thoughts and prayers. But is there something else, something in the Constitution, to protect women — and all Americans — from sex discrimination under the law?

The Equal Rights Amendment is our 28th Amendment to the U.S. Constitution. The ERA provides: “Equality of rights under the law shall not be denied or abridged by the United States or by any State on account of sex.” The ERA meets the strict requirements of our Constitution to be added. Specifically, the ERA was passed by over a two-thirds vote in each house of Congress in 1972. Then it was ratified by three-quarters — or 38 of 50 — of the states in 2020. That is all that is required under Article V of the Constitution for an amendment.

The ERA has not been officially published. In 2020, publication of the amendment was blocked by a politically motivated, erroneous legal opinion issued by the Trump administration’s Department of Justice. The Trump DOJ referenced an expired “deadline” as its excuse.

However, the so-called deadline on the amendment — expiring in 1979 or 1982, depending on whom you ask — was never within the power of Congress to impose. Congress does not have authority under the Constitution to set a ratification time limit on the states. A time limit itself amends the Constitution and must be approved by both Congress and the states, as with any amendment.

The states did not approve an ERA ratification time frame. Consequently, the ERA “deadline” is invalid and unenforceable.

Another objection to publication is that a handful of states have tried to rescind their ratifications.

However, rescissions of earlier ratifications have never been honored. A ratification once made cannot be revoked. We know this from the definition of “ratification” at the time the Constitution was written, from James Madison’s words to Alexander Hamilton in 1788, and from the histories of the 14th, 15th and the 19th amendments. The same rules apply to the ERA.

The Biden administration has failed to correct the erroneous Trump administration legal opinion. Instead, the Justice Department under Garland has said it will look to the judicial and legislative branches for an opinion on what the executive branch should do.

However, few may know that later this month, in the U.S. Court of Appeals for the D.C. Circuit, Garland’s Justice Department is fighting a lawsuit, filed by the attorneys general of Illinois and Nevada, to force publication of the ERA by the executive branch.

Each branch of government has to interpret the Constitution to do its job. Each leader within government has a direct duty and swears an oath to uphold the U.S. Constitution. There is no waiting around for other branches to weigh in. Under 1 U.S. Code 106b, the Biden administration has the functionary duty to publish the Equal Rights Amendment. No other branch has that responsibility.

It is specifically the Justice Department’s job to provide the executive branch with legal advice. By playing “hot potato” with the ERA — and by hypocritically and wrongly opposing the ERA in federal court — Garland is failing to do his job. There is only one correct answer under our Constitution, but whether those in power will follow the rule of law these days is uncertain.

Instead of offering us thoughts and prayers on women rights, it’s time the Biden administration does its job. Publish the ERA today.

Michele Thorne is an Illinois attorney and legal scholar with a practice that includes human rights law.