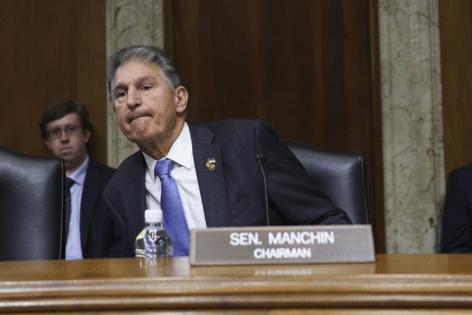 WASHINGTON — The path to averting a partial government shutdown by Friday night just became a little easier to see after a key procedural vote in the Senate showed broad bipartisan support for a temporary spending bill.

The Senate voted 72-23 on Tuesday to end debate on the motion to proceed to the continuing resolution, after top Democrats said they’d drop a contentious environmental policy rider that had drawn critiques from the right and left.

Sen. Joe Manchin III, D-W.Va., agreed Tuesday to remove his energy infrastructure permitting proposal from the short-term spending bill, eliminating what had been the chief obstacle to bipartisan support. Senate Majority Leader Charles E. Schumer, D-N.Y., said on the floor he accepted Manchin’s offer and would offer a new version without the permitting language.

That concession ended days of uncertainty and ensured Democrats would cross the 60-vote threshold needed so they can call up for debate the legislative vehicle that’s being used to carry the stopgap funding measure.

“Sen. Manchin, myself and others will continue to have conversations about the best way to ensure responsible permitting reform is passed before the end of the year,” Schumer said Tuesday shortly before the cloture vote on the motion to proceed.

Manchin said in a statement that a “failed vote” on his proposal would “embolden” leaders like Russia’s Vladimir Putin and push the federal government to the brink of a partial government shutdown. Current appropriations are set to lapse at midnight Eastern time Saturday.

The move likely paves the way for quicker passage of the continuing resolution in the Senate, with time running short before Friday’s deadline. The House has “same-day” authority to take the measure up as soon as it reaches that chamber, but fewer procedural hoops for the Senate to jump through will give congressional leaders and federal agencies a little more breathing room.

Still, it wasn’t clear all Republicans would consent to a time agreement needed to truncate debate time. Sen. Roger Marshall, R-Kan., for instance, said he wasn’t sure he’d object to speeding up the process but that he had “no problem” shutting down the government over rampant spending that was fueling inflation.

The underlying bill would extend current government funding levels through Dec. 16 with certain exceptions, or “anomalies,” for specific programs that need higher rates of funding. Congressional leaders also agreed to tack on $12.3 billion for assistance to Ukraine and $5 billion for assorted other purposes, like disaster relief and caring for unaccompanied migrant children at the border.

Victims of a devastating New Mexico wildfire would be eligible for $2.5 billion in compensation under the measure, and the State Department would receive as much as $3 billion from existing Pentagon funds to help resettle Afghan refugees.