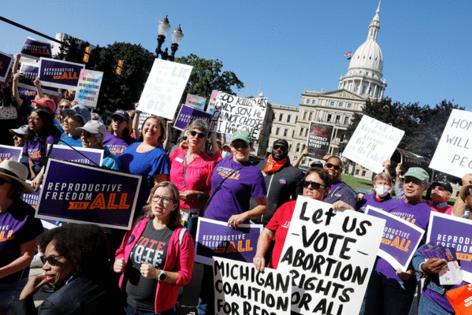 The national debate in the aftermath of the Supreme Court’s decision to overturn Roe v. Wade in June is playing out in elections across the country, marking a record number of abortion-related ballot measures and in some cases becoming a key political issue even before the mad dash to include additional initiatives that followed the high court’s ruling.

Special interest groups on both sides of the abortion debate have poured millions into turning out core supporters and elevating the issues for the first major post-Roe election. But abortion rights supporters have been energized after defeating a Kansas initiative in early August. In Kansas, 59 percent of primary voters opted against an amendment that would have explicitly added language to the state constitution clarifying that abortion is not a protected right.

“Many of us had a delightful wake-up call on this issue and the power of ballot measures in early August with the vote in Kansas,” said Kelly Hall, executive director of the ballot measure advocacy group called the Fairness Project, speaking at the National Press Club on Tuesday. But the measure, while alerting voters to “how popular this issue really is,” has also “sparked a backlash and a lot of opposition spending,” she said.

Montana voters, meanwhile, will decide if the state should include broader language for infants who survive an attempted abortion.

Spending ahead of the ballot votes this year varies by state and largely depends on how tight the campaign is expected to be.

Michigan, which is likely to be the most competitive measure in November, also leads in spending expenditures so far. Data from the Michigan Department of State shows $7.7 million in expenditures related to the amendment.