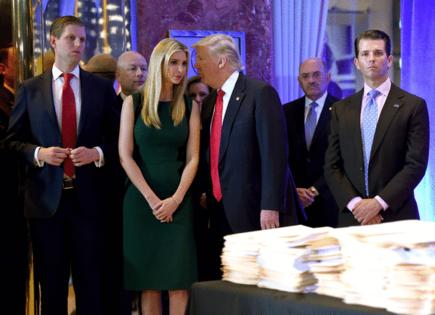 NEW YORK — Donald Trump’s myriad of legal problems have intensified after a whirlwind week of lawsuits and court decisions that went against the embattled former president — including a civil suit filed by the New York attorney general that partly seeks to prohibit him or his adult children from ever running a company in their home state again.

It was just one of several new setbacks for Trump, as the probe into his handling of classified documents continues and unsealed court papers revealing that a writer already suing him for defamation plans to file a second lawsuit alleging he raped her, under a historic new law passed by New York legislators.

The new week only promises to bring more troubles for Trump. The House panel investigating the Jan. 6 insurrection of the U.S. Capitol indicated the final televised hearing set for Wednesday will be an explosive event featuring new witness testimony.

Attorney General Merrick Garland’s investigators continue to investigate Trump’s handling of highly sensitive classified documents in a probe that could result in a federal indictment.

Trump scored a point when Judge Aileen Cannon tasked a well-respected Brooklyn judge with examining more than 10,000 seized documents as a special master in the DOJ probe. He lost one when an unimpressed Judge Raymond Dearie put his lawyers on the hook by forcing them to take a position on whether he declassified documents and detail his unfounded claim the FBI planted evidence.

“My view is you can’t have your cake and eat it,” Dearie told Trump’s lawyers when they appeared before him on Wednesday.

In another blow, the 11th Circuit ruling that gave the Justice Department access to continue looking through the files also struck down Cannon’s order allowing Dearie to oversee documents marked “top secret.”

Trump continues to claim he did nothing wrong — and was widely ridiculed after a Fox interview last week in which he claimed, “If you’re the president of the United States, you can declassify just by saying, ‘It’s declassified.’ Even by thinking about it.”