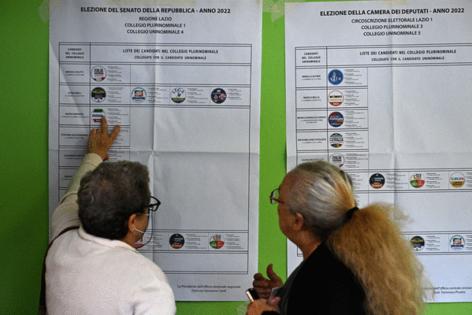 Giorgia Meloni is on track to lead Italy’s most right-wing government since World War II after early results signaled a clear victory for her coalition in Sunday’s election.

Meloni’s alliance, which includes Matteo Salvini’s League and Silvio Berlusconi’s Forza Italia, will win about 43% of the vote for the crucial upper house, according to projections from RAI, the public broadcaster. That would give the bloc at least 114 seats in the Senate, where 104 votes are required for a majority, putting her in line to become the country’s first female prime minister.

Meloni has emerged from the political fringes after leading the opposition to Mario Draghi’s technocratic administration over the past 18 months. Yet the charismatic 45-year-old has little experience governing and she would be taking office at a perilous moment for her country.

The next Italian government will face a series of overlapping crises as the energy shortages triggered by Russia’s invasion of Ukraine fuel rampant inflation and undermine growth. The hit to Italy’s finances and the prospect of more interest-rate hikes from the European Central Bank have pushed the yield on Italy’s 10-year bonds to more than 4.3% compared with less than 1% in December.

Meloni cut her teeth in politics as a far-right activist in the 1990s and her campaigning is still marked by fiery attacks on the European Union, immigrants and LGBTQ groups. But she has also tried to reassure voters and investors that she will keep Italy’s mammoth debt under control and won’t question the country’s foreign alliances or support for Ukraine.

“The question is whether they will deviate from Draghi’s reform plan, which will impact whether the money will keep flowing from the EU,” Yu said.

Meloni is likely to have a strong hand in government as she looks to reverse some of the reforms that Draghi had introduced in an effort to boost growth. Seeking significant revisions could put at risk a spending plan for about 200 billion euros ($198 billion) of pandemic recovery funds from the European Union.

Traders brushed off the result during early foreign exchange trading in Asia, with the euro up as much as 0.2% against the dollar after earlier falling as much as 0.3%.

The result marks a meteoric rise for Meloni’s party, the Brothers of Italy. The group is set to claim about 25% of the vote, compared with 4% in the last election in 2018.