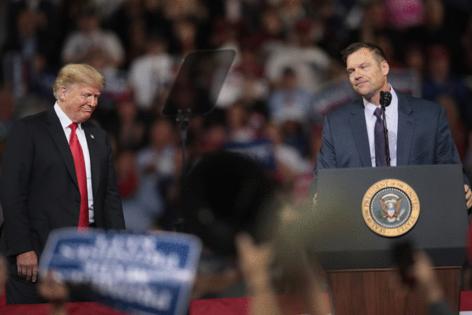 "This issue is not over," Kobach said Friday at a Wichita Pachyderm Club campaign appearance. "The fight for life is going to continue."

Kobach, former Kansas secretary of state, is calling on the GOP-dominated Legislature to put forward another ballot question that would amend the state's constitution. This time, it would not address abortion rights directly. Instead, it would ask voters whether Kansas Supreme Court justices should be selected by direct election.

The change, Kobach said, would clear a path for the state to "slowly and quietly" place anti-abortion judges on the state's high court with the ultimate goal of overturning the Kansas Supreme Court's 2019 Hodes decision that found the state constitution includes the right to an abortion.

Kobach said the Hodes decision threw "a huge wrench into the works" of the anti-abortion movement in Kansas.

"Now, there are two ways to deal with that," Kobach said. "There are two paths. One is to come in with a state constitutional amendment that corrects the decision. That's what we just tried to do, and it didn't work out. But there's another path."

Electing justices by popular vote is the next-best option for overturning the Hodes decision, Kobach said.

Kansas already allows voters to oust unpopular judges from the state's high court, but Kansas voters have never done so. In November, six out of seven justices are up for a retention vote.

Kobach blamed the August defeat partly on the wording of the Republican-crafted Value Them Both amendment, saying it confused voters and allowed the Vote No campaign to "muddy the waters."