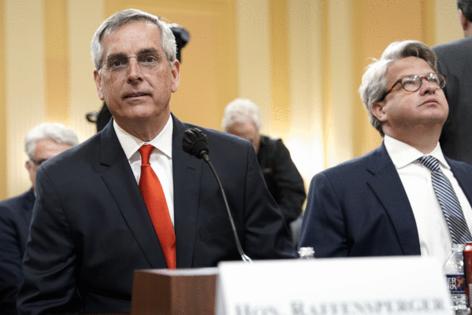 Replacing the equipment could cost taxpayers hundreds of thousands of dollars, but Raffensperger said it’s necessary to avoid “distraction and misinformation” before this year’s elections.

Election security experts who oppose Georgia’s voting system say the copying of election software increased the risk of hacks or malware that could attempt to manipulate election results, though there’s no evidence that has happened in an election so far.

”To allay the fears being stoked by perennial election deniers and conspiracy theorists, we’re replacing Coffee County’s election machines,” said Raffensperger, a Republican. “Replacing the equipment puts an end to any argument that the results in Coffee County, and anywhere else in Georgia for that matter, will not accurately reflect the will of Georgia voters.”

Video recently revealed through an election security lawsuit showed the computer analysts were escorted into the rural South Georgia county’s elections office by Cathy Latham, a fake elector who tried to award the state’s presidential votes to Trump.

They were also accompanied by the county’s elections supervisor and a bail bondsman who was skeptical of the results. An attorney for the analysts has said they were preserving election data for Powell.

The 2020 election results have been upheld by recounts, court cases and investigations. Democrat Joe Biden defeated Trump, a Republican, in Georgia by about 12,000 votes.

Marilyn Marks, a plaintiff in the lawsuit, said replacing some of the voting equipment is “completely and totally inadequate.”

Though the secretary of state’s office previously installed a new server and scanner in June 2021, Marks said malware could have spread since then if other equipment were infected. She also said the software for the state’s Dominion Voting Systems machines has been distributed to election conspiracists who could use it to craft hacks that could contaminate machines anywhere in the state.