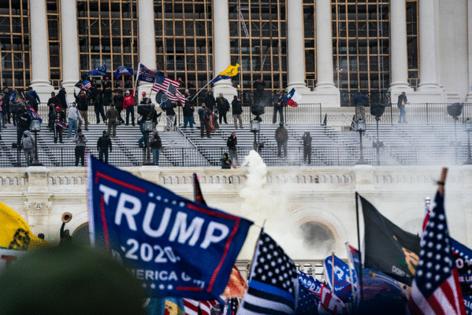 WASHINGTON — Americans who were educated on congressional proposals aimed at preventing another Jan. 6 attack prefer Senate reforms to a more far-reaching House bill, the University of Arizona's National Institute for Civic Discourse found in an informed opinion poll conducted over the summer.

The House and the Senate have crafted competing bipartisan proposals that would reform how Congress counts electoral votes.

Although the two bills are similar, they diverge on a so-called objection threshold.

Current law allows one member of the House and one member of the Senate to object to an elector or slate of electors, making it relatively easy for a minority of politicians to cast doubt on the legitimacy of an election. That's exactly what happened ahead of the Jan. 6, 2021, attack on the U.S. Capitol.

In the informed opinion poll — unlike traditional surveys, participants read detailed policy briefs before taking a position — 75% of participants supported raising the threshold to one-fifth of each chamber. That number included 93% of Democrats, 77% of independents and 53% of Republicans.

Only 55% of respondents supported the more stringent one-third threshold. That included 72% of Democrats, 59% of independents and 37% of Republicans.

Senators introduced their legislation in July and believe it has the best chance of becoming law because it has enough Republican support to avoid a filibuster. Senate negotiators added two more co-sponsors to their cause Thursday, with Sens. Pat Toomey (R-Pa.) and Maggie Hassan (D-N.H.) becoming the 21st and 22nd co-sponsors.

The legislation is set for a markup in the Senate Rules Committee on Tuesday, but the proposal is unlikely to see a floor vote in the upper chamber until after the midterm elections.

The House, meanwhile, unveiled its version this week and passed it on the floor Wednesday in a 229-203 vote. Nine Republicans joined all but one Democrat, who didn't vote, in support of the measure.

The path forward is unclear, but supporters of the reforms hope an update to the Electoral Count Act of 1887 will make it to the president's desk before newly elected members of Congress take office in January.

The survey also found that additional provisions Congress is pursuing are broadly popular. Clarifying that the vice president's role in the electoral count is ministerial earned 89% support. The idea that legislatures must abide by laws on the books on election day unless there's a catastrophic event received 80% support, and provisions requiring Congress to honor court rulings and limiting grounds for objections to a state's slate of electors received 78% and 77% support, respectively.

President Joe Biden is going all Catholic on the GOP.

The second Roman Catholic president blasted the proposed national ban on abortions put forward by Sen. Lindsey Graham (R-S.C.) as a heartless attack on the rights of ...Read More

WASHINGTON — The Biden administration is poised to launch a private refugee sponsorship program in the coming months, an effort that could accelerate lagging refugee admissions in the United States.

The program will ...Read More

In September 2022, President Joe Biden convened a summit called United We Stand to denounce the “venom and violence” of white nationalism ahead of the midterm elections.

His remarks repeated the theme of his...Read More

The battle over Ukraine extends across the world: Information warfare is quickly evolving as key nations seek to influence public opinion and gain political support.

As during the Cold War, Russia and the United...Read More

Perhaps the starkest example of how dramatically Donald Trump’s fortunes have changed in just a matter of days is contained in the opening paragraph of New York Attorney General Leticia James’ financial fraud civil ...Read More