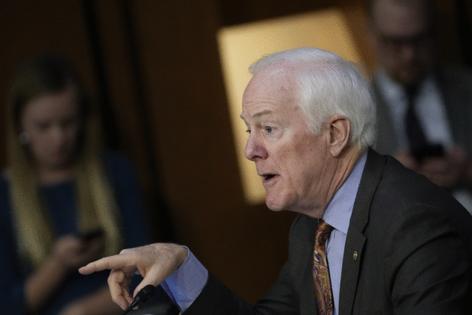 WASHINGTON — U.S. Citizenship and Immigration Services is on track this fiscal year to process the most employment-based green cards in the history of the program, after several years of falling short on processing goals.

For the tens of thousands of highly educated foreign citizens who got their green cards this year, the processing boost was life-changing, chopping years off their wait times. It also likely alleviated the labor crunch for companies searching for skilled workers in health care and other industries.

But the agency won’t be able to maintain that increased pace without action from Congress, where proposals to allow more employment-based green cards each year have been caught in the political thicket of immigration reform and border security.

USCIS, the Department of Homeland Security agency that processes requests for visas and other benefits, had more than double the usual number of employment-based green slots to work with this fiscal year because of a confluence of immigration law and processing halts due to the pandemic.

Employment-based green cards are typically capped at 140,000 per year, a congressionally mandated visa limit that, combined with per-country visa caps, caused a waitlist to build up over time, particularly for Indian citizens.

Family-based green card processing has taken a hit during the COVID-19 pandemic because of closures at State Department consular offices. This made room for more employment-based green cards.

In years past, USCIS failed to rise to the occasion when there were extra employment-based green card slots.

Last fiscal year, the immigration agency let tens of thousands of extra slots go to waste because of agency processing delays, which angered immigrants who had spent years in a backlog waiting for a green card to become available.

A USCIS spokesperson credited the “tremendous effort of the USCIS workforce and our partners at the Department of State” for the agency’s ability to process all available employment-based green cards this fiscal year.

The agency estimated that 95,000 Indian citizens received an employment-based green card this year, which is more than four times the typical number before the pandemic.

Chandra Kothareddy, an Indian database administrator at a bone marrow donation nonprofit in Minnesota, said his wife cried with joy when the two got their green cards earlier this month, after nearly two decades on temporary visas.

He recounted years of worry about work permit delays and traveling internationally and said that now, with his green card, he finally feels “comfortable.”

But the effect on the larger backlog as a whole — estimated to include more than 1 million immigrants — remains to be seen, analysts said.

According to Bier, whose organization analyzes green card data, the employment-based green card backlog stood at roughly 1.4 million at the start of this fiscal year, in October 2021, and is now probably several hundred thousand cases lower.

Michael Turansick, supervisory policy and practice counsel at the American Immigration Lawyers Association, said the effect of the additional processing on the backlog is “probably yet to be fully determined.”

“I think that the fact that the agency was able to issue twice the normal annual allocation, over 280,000 employment-based immigrant visas, is a significant accomplishment,” Turansick said. “It did clear out a lot of cases that have been pending for a long time.”

“Having said that, the backlogs are still significant,” he said.

Even as the green card demand stays high, legislative proposals to reduce the backlog have languished in Congress, despite enjoying some bipartisan support.

Congress came close two years ago to passing legislation that would eliminate the per-country caps, which prevent any one country from eating up more than 7% of total employment-based green cards. These caps disproportionately affect applicants from populous countries like India and China.

Both chambers passed their own versions of the bill with bipartisan support, but the session ended before the two could reconcile their differences and send the legislation to then-President Donald Trump’s desk.

Reps. Zoe Lofgren, D-Calif., and John Curtis, R-Utah, in the House, and Sens. Kevin Cramer, R-N.D., and John Hickenlooper, D-Colo., in the Senate proposed similar bipartisan versions of that bill this Congress.

Democrats have proposed an alternative version in both chambers, with support from Senate Judiciary Chairman Richard J. Durbin, D-Ill., that would eliminate the country caps while increasing the overall number of green cards available.

Republican Sen. Thom Tillis of North Carolina also proposed legislation, joined by one Democrat and three Republicans, to reduce the backlog by reclaiming the unused employment-based green card slots that expired in recent fiscal years because of USCIS delays.

Xiao Wang, co-founder of Boundless Immigration, a tech startup that helps immigrants apply for green cards and citizenship, said there “isn’t anything that has a hope of passing the Senate that’s related to immigration right now.”

“This is a case where, even if behind closed doors 80 percent of Congress will tell you they agree with a common set of immigration improvements, the current state of politics makes it impossible for them to actually get anything through,” Wang said.

Tillis said in a brief interview last week that the lame-duck period after the midterm elections would be the most likely time for Congress to take up any legislation on green card relief.

He also said he sees increasing interest for such proposals in the Republican caucus.

“When you see the labor participation rates and you hear from various industries, and it’s agriculture, hospitality, leisure, construction trades. I mean, we’ve got chronic shortages and they have been sustained,” Tillis said. “So I don’t see how any reasonable person can get to a solution to the problem without this being a key part of it.”

But he and other Republicans have also signaled they would be unwilling to pass any immigration bill without measures to tighten border security.

At a Senate panel hearing earlier this month on how immigrants could fill health care workforce shortages, Sen. John Cornyn, R-Texas, said there will be no solution to employment-related immigration challenges “until we find a solution to what’s happening at the border now.”

Tillis added at the hearing: “Not a single one of us — or at least me, I won’t speak for my colleagues — will unless we fix the underlying problem with border security.”