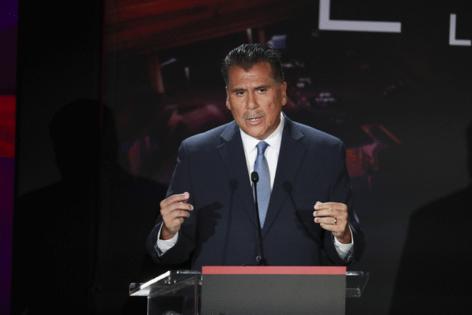 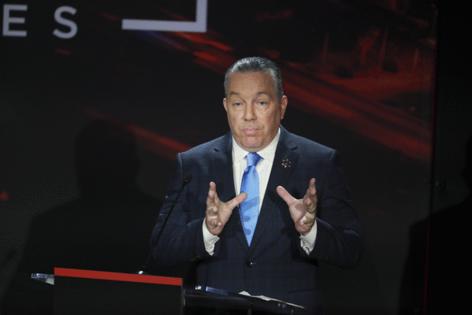 Villanueva painted his opponent as someone who would be a “puppet” for the county Board of Supervisors, which controls the Sheriff’s Department’s budget, while Luna accused the sheriff of spewing falsehoods about his tenure in Long Beach and blamed him for causing the bitter relationships Villanueva has with other county leaders.

When asked about the controversial raids by sheriff’s deputies last week at the home and office of county Supervisor Sheila Kuehl, who is a vocal critic of Villanueva, and others in connection with a corruption probe, Luna said he would have referred such a case to an outside agency.

“The sheriff had no business investigating this from the very beginning,” Luna said. “You cannot investigate your political opponents or enemies.”

Villanueva fired back: “He’s not going to touch public corruption. He won’t touch it with a 10-foot pole because his job as puppet is to look the other way.”

Luna suggested that Villanueva routinely deflects responsibility for failures that have occurred on his watch — such as the uptick in homicides in the sheriff’s jurisdiction — onto the supervisors and the district attorney. Violent crime in Long Beach went down under his watch, Luna said.

“I was working for the same D.A. that everybody else was in L.A. County,” Luna said. “Stop the excuses. Let’s get the job done.”

The candidates were asked about homelessness, one of the most pressing issues to county voters. Luna criticized Villanueva for going before news cameras to inaccurately and unfairly take credit for clearing encampments in Venice and elsewhere , while Villanueva retorted that Luna had no plan to address the crisis.

Asked how he’d explain what a moderator said was his recent comment that Black people were “prone to criminality,” Villanueva dodged the question. Instead, he tried to turn the attention on Luna, alleging he had mishandled an incident in Long Beach, in which a member of the department’s homicide unit drew a family tree of convicted killers with a noose around the neck of a Black man.

Luna retorted that he had reported the drawing properly and that it had been investigated, but Villanueva said an officer who raised concerns about the episode faced retaliation.