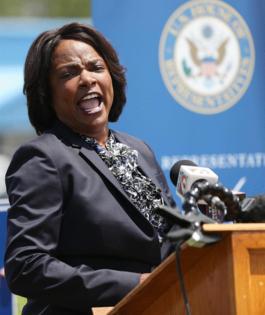 In the three months since the Supreme Court’s landmark Dobbs ruling revoked the right to an abortion, the Democrats’ nominee for Senate in Florida has argued that Republicans — led by her opponent GOP Sen. Marco Rubio — are attempting to limit or altogether eliminate the freedom once afforded to women, replacing personal decisions with ones mandated by state or federal government.

In statements, campaign-trail speeches, and widely broadcast ads, the congresswoman has repeatedly leaned into the message, hoping it can win over not just core Democrats but also the valuable swing voters her campaign needs to attract in droves ahead of November’s election.

“I will never stop fighting to codify Roe v. Wade,” Demings said in a statement, “and protect the fundamental freedom of women and girls to choose our own destiny.”

Her approach is part of a broader strategy from Democratic candidates across the country, many of whom have woven appeals to freedom into their broader rhetoric about abortion rights and the political price they think Republicans should pay for opposing them.

It’s a rare opportunity, party strategists say, to stake a claim on a politically potent issue that has been a GOP strong point for years.

“That kind of government overreach is becoming a mantra for the Republican Party in a way they used to cry out against,” said Ronja Abel, spokeswoman for EMILY’s List, a Democratic group that supports abortion rights and has endorsed Demings. “Democrats have been able to reclaim that mantle of anti-government overreach.”

Republicans fiercely contest that liming abortion rights amounts to an overall loss of freedom, instead of granting the unborn a chance at life.

They have made personal freedom a big part of their own campaigns, arguing that pandemic-era restrictions on everyday matters like business openings and school closings unnecessarily limited Americans’ rights and caused great harm to society along the way.

WASHINGTON — The Supreme Court on Thursday refused an emergency appeal to revive President Joe Biden’s student loan forgiveness plan, but agreed to rule early next year on its legality.

The justices left in place an ...Read More