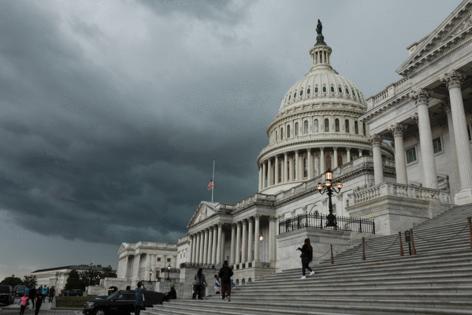 WASHINGTON — As outside groups from both sides of the political aisle invest hundreds of millions of dollars in the midterm elections, senators planned to try Thursday to start a debate on a measure to unmask more donors. They are not likely to succeed.

The bill, known as the DISCLOSE Act, would require corporations, trade associations and nonprofit organizations that engage in electioneering to publicly disclose donors who contribute more than $10,000 over two years.

Democrats have pushed for more disclosure since the 2010 Supreme Court decision in the Citizens United case that led to donors being able to give unlimited amounts. Congressional Republicans have opposed it, arguing it would chill free speech including grassroots lobbying efforts that don’t directly relate to elections.

The procedural motion on whether to take up the bill Thursday would require 60 votes and is almost certain to come up short.

“It feels like we’re living though ‘Groundhog Day’ if Senate Democrats are holding another vote on the DISCLOSE Act; all indications are that history will repeat itself yet again and the legislation will fail on the floor,” said GOP campaign finance lawyer Michael Toner. “As a practical matter The DISCLOSE Act is dead for this Congress.”

But supporters say the vote will bring public focus to the issue, as voters become inundated with political messaging heading into the fall midterm elections. President Joe Biden offered an endorsement of the bill Tuesday, and outside advocates pushing for the bill said they would turn their focus to the administration to urge additional steps on some political disclosures if it does get blocked in the Senate.

Senate Minority Leader Mitch McConnell, a longtime opponent of political money regulations, said Wednesday on the floor that the measure would offer government bureaucrats “even more power to police political speech and activism of private citizens.”

Proponents of the measure said the campaign season made for good timing to put senators on the record.

“In the midst of an election cycle, the urgency is, I think, even more tangible to people who may not pay as careful attention,” said Erin Chlopak, senior director of campaign finance for the Campaign Legal Center, which supports the measure.