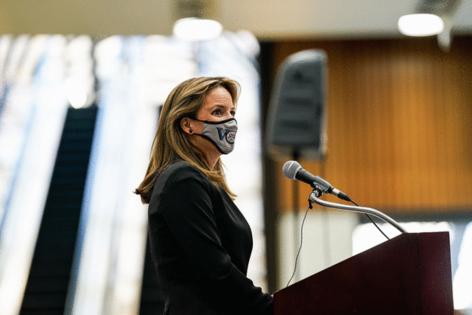 LANSING, Mich. — Michigan clerks who handed over voting tabulators to aid investigations into unproven claims of fraud in the 2020 presidential election could lose their ability to administer future elections unless they confirm they've stopped allowing unauthorized access to equipment.

"If you fail to provide these confirmations, you will be instructed to refrain from administering any elections in Irving Township and legal action will be taken as necessary to enforce this instruction," Brater wrote to Olson. "Be advised that willfully failing to comply with a lawful order from the secretary of state is a misdemeanor."

The letter to Olson became public this week because it was cited in a Monday court filing by Barry County Sheriff Dar Leaf.

The Secretary of State's office then confirmed similar directives were sent to Stevenson and Winkelmann. All three clerks were named in an Aug. 5 letter to Secretary of State Jocelyn Benson about an investigation by Attorney General Dana Nessel's office, which alleged a "conspiracy" had occurred to gain improper access to five voting tabulators in Michigan.

The clerks' first reports on protecting equipment were due Sept. 2, and all three clerks confirmed they had not provided additional unauthorized access, said Jake Rollow, Benson's spokesman.

A fourth letter from Brater went to Richfield Township Clerk Greg Watt, but in it, Brater didn't require reports on whether unauthorized access had been allowed. Watt was not named in the Aug. 5 letter from the Attorney General's office.

Leaf previously sued Benson, Nessel and the state police, saying they improperly interfered with his investigation into unproven and vague claims of wrongdoing in the 2020 presidential election.

However, Nessel's office says Leaf was one of nine individuals involved in the tabulator "conspiracy."