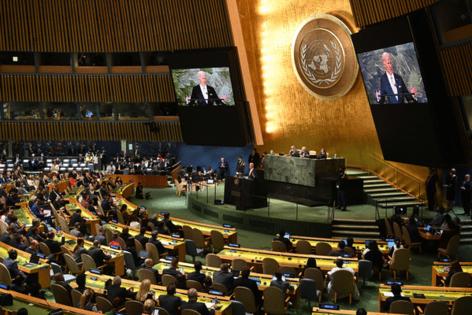 President Joe Biden condemned Russian President Vladimir Putin’s invasion as a violation of the principles underpinning the United Nations and called on the world to maintain support of Ukraine.

“If nations can pursue their imperial ambitions without consequences, then we put at risk everything this very institution stands for -- everything,” he added.

Biden spoke hours after Putin called up 300,000 reservists in what he labeled a “partial mobilization” effort, and, in a nationally televised address, portrayed his war against Ukraine as a fight to the death with the U.S. and its allies. The president adjusted his remarks following Putin’s latest escalation, according to people familiar with the matter.

“Just today, President Putin has made overt nuclear threats against Europe and a reckless disregard for the responsibilities of a non-proliferation regime,” Biden said.

The development coincides with a pivotal moment in the conflict. Kyiv has gained the military advantage against Moscow with a lightning offensive as Europe grapples with an unprecedented energy crisis that could test U.S. allies’ willingness to maintain the pressure campaign on Putin.

The president sought to show how the U.S. is leading by example. His administration approved $600 million in additional weaponry from U.S. stockpiles as it seeks to add momentum to Ukrainian forces’ recent counteroffensive against Russian troops in the northeast Kharkiv region.

Putin, in response, has threatened more dire consequences for Ukraine, including pursuing plans to annex occupied Ukrainian territory and raising the specter of nuclear strikes to defend it. “This is not a bluff,” Putin said Wednesday in his speech.

Russian forces also have stepped up attacks on civilian infrastructure. Earlier this week, Ukraine said Russian forces targeted an artillery strike at a nuclear plant north of the city of Mykolayiv, raising concerns about the potential for an atomic disaster. The strikes add to worries triggered by fighting around the occupied Zaporizhzhia power plant.