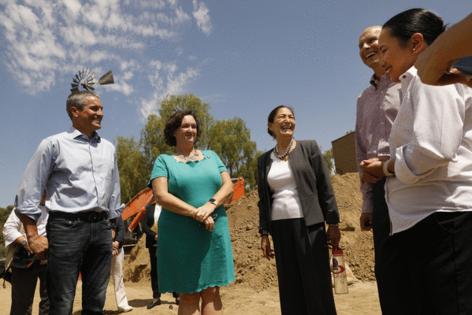 IRVINE, Calif. — Democratic lawmakers, members of President Joe Biden’s Cabinet, and allied organizers and activists are kicking off a multipronged public relations campaign aimed at ensuring voters understand — and appreciate the benefits of — the $700-billion climate-change and drug-prices bill that Biden signed Tuesday.

In Irvine on Thursday, Rep. Katie Porter, a swing-seat Democrat, stood in front of a hulking orange Hitachi excavator at the Irvine Ranch Water District, which is expanding its reservoir using funds from last year’s $1-trillion infrastructure overhaul package. Appearing alongside Interior Secretary Deb Haaland, Porter noted that Democrats’ latest legislation — the central pillars include $369 billion to combat climate change and long-sought changes to lower the cost of prescription drugs — will continue to support the water district and similar facilities across the country.

“This new law invests $4 billion in water conservation, efficiency and restoration, and that supplements the more than $50 billion already allocated in the bipartisan infrastructure law to help us modernize our water infrastructure and improve our drinking water supply,” Porter said.

Speaking to a group of farmers and ranchers inside a cider production facility in Palisade, Bennet, a vulnerable Democrat seeking a third six-year term, emphasized the law’s $4 billion in drought mitigation funds, its $20 billion for land conservation projects and $5 billion for improving the health of forests and preventing fires.

“We’ve passed some interesting legislation,” Bennet told the group. “And at every step along the way, we’ve been trying to make sure that we’re supporting our producers,” he continued, touting the new funding for forestry as “a record amount.”

Since the first days of his presidency, Biden has said that his party must clearly and constantly explain its actions to the public. Recalling the Obama administration’s struggle to sell the Affordable Care Act in 2010 ahead of an eventual midterm drubbing, Biden urged Democrats to unabashedly tout the benefits of the $1.9-trillion American Recovery Plan they pushed through in March 2021.

“Barack was so modest, he didn’t want to take, as he said, a ‘victory lap,’” Biden told House Democrats at the time. “I kept saying, ‘Tell people what we did.’ He said, ‘We don’t have time. I’m not going to take a victory lap.’ And we paid a price for it, ironically, for that humility.”

Biden’s team hopes that their more fulsome effort will lead to a different result for Democrats this November. Republicans, who after the healthcare law’s passage in 2010 stoked fears about “death panels,” rising premiums and fewer choices of doctors or plans, have also attacked the new bill as costly and partisan. They’ve questioned whether it will actually reduce the cost of goods and services and suggested that the $80 billion aimed at reducing Internal Revenue Service backlogs will lead to more audits on low- and middle-income households.