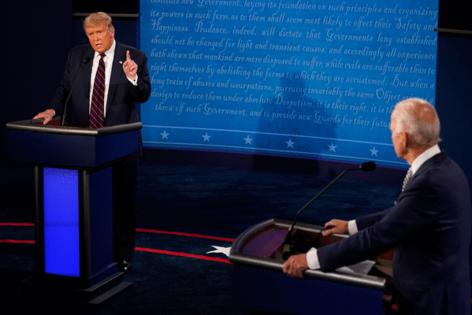 Californians have little appetite for a rematch of the 2020 presidential race, according to a new UC Berkeley Institute of Governmental Studies poll, with strong majorities of the state's voters hoping neither President Joe Biden nor former President Donald Trump runs again in two years.

The poll, co-sponsored by The Times, found that roughly 6 in 10 respondents are against Biden trying for a second term in 2024 — a striking reluctance in a solidly Democratic state that he won handily. Another Trump campaign would be even less popular, with more than 70% in opposition.

Vice President Kamala Harris, widely considered Biden's chosen successor to lead the party, also struggles to find traction in California, her home state, lagging behind Gov. Gavin Newsom and independent Sen. Bernie Sanders of Vermont as voters' choice for president if Biden does not run. But no candidate emerges as the consensus favorite for the Democratic nomination in this early gauge of potential 2024 contenders.

"While many California Democrats are not convinced that Biden should run again, the absence of a clear Democratic alternative may afford [him] more space in avoiding a serious primary challenge should he decide to seek reelection," said Eric Schickler, co-director of the Institute of Governmental Studies.

The findings come at a time when Democrats are increasingly vocal about their anxieties over the next presidential campaign.

Biden, 79, has consistently said he intends to run, but has already made history as the oldest president. Republicans frequently call attention to his age, questioning his fitness for the job. He will be 82 on Inauguration Day 2025.

"The age factor has to be looming in many voters' minds," said Mark DiCamillo, who co-directs the institute.

Just 3 in 10 California voters in the poll said they supported another Biden candidacy, while 61% were opposed — nearly identical to the share of the vote he won in the state in 2020. Among poll respondents who voted for him two years ago, nearly half said they opposed him running again. And among voters with favorable views of Biden's current job performance, nearly 30% said they would not like to see him run in 2024.

Nor is there a loud clamor in California for Harris, 57, the state's former U.S. senator, to assume the Democratic Party's mantle. The vice president's approval ratings have flagged, even in her home state.

Her allies see an opportunity for Harris to break from the polling doldrums by leading the administration's efforts to preserve abortion rights. Still, voters eligible to participate in the Democratic presidential primary in California — those registered as Democrats or with no party preference — ranked her third in a list of potential candidates for the Democratic nomination if Biden is not on the ballot in two years; 1 in 10 had Harris as their top pick.