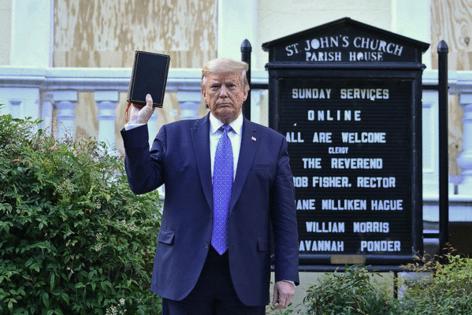 A new book about former President Donald Trump’s relationship with the Pentagon’s top military commanders offers a vivid glimpse into the way he misconstrued the military as just another asset in his political inventory, a tool to be used for whatever personal objective he sought. And he actually wondered out loud why his generals couldn’t be more loyal and subservient, like Adolf Hitler’s.

The account in a new book by Peter Baker of The New York Times and Susan Glasser of The New Yorker is just one element of a pattern in which Trump reportedly thought of the presidency in imperial terms, where the law and constitutional restrictions didn’t apply to him. Governmental functions that were supposed to be non-political and independent of White House interference, including Justice Department operations and the entire electoral system, were instead interpreted by Trump to be there for his personal empowerment.

The inherent dangers of such dictatorial powers became obvious on Jan. 6, 2021, when Trump directed a mob toward the Capitol to subvert democracy, as well as last week when the FBI seized a trove of classified documents at Trump’s Mar-a-Lago estate — documents he had no legal right to possess.

In 2020, Trump contemplated activating the National Guard to seize voting records in a bid to prove his wild assertion that the presidential election was stolen from him. Months earlier, he had used the military inappropriately to disperse protesters near the White House so he and the Joint Chiefs chairman, among others, could pose for photos outside a church.

His former chief of staff, retired Marine Gen. John Kelly, recalled a complaint Trump made about all the second-guessing he was getting from the Pentagon’s top brass. “Why can’t you be like the German generals?” Trump complained. Kelly responded, according to the book, that Hitler’s generals tried three times to kill him — a fact Trump denied because it didn’t fit his delusional version of world history.

Trump was so mercurial and so resentful of advice that didn’t mesh with his own thinking that top generals actively sought to avoid the Joint Chiefs chairmanship because they didn’t want to have to deal with him.

Dangerous as was a situation in which the top Pentagon command distrusted the president and his motives and considered not carrying out his orders, the bigger danger was the way Trump wanted to subvert the military for his own political advancement. He wanted a big military parade but insisted it exclude wounded veterans because “this doesn’t look good for me.”

Much as Trump and his supporters try to portray the Mar-a-Lago search as signifying America’s descent into banana republic politics, the real culprit was his own subversion of democracy and attempt to politicize the military. Luckily, the generals refused to go along. Too bad the same can’t be said of the Republican Party.